Magnum Research is one of the famous small arms manufacturers in the world and is absolutely best known for their Desert Eagle handguns. But they’ve also been making mid-range rifles chambered in .22 Long Rifle for quite some time.

Their MLR-series of rifles is patterned off one of the most successful semi-automatic .22 ever designed, the Ruger 10/22.

The MLR rifles are less known than the Ruger 10/22 for a handful of reasons but ultimately have been less popular because of their relative high price. Historically one MLR cost three to four times as much as a 10/22. Yes, they were made to a different standard but that price gulf was not enough for many to justify the Magnum Research MLR.

In an effort to change this, Magnum Research is re-releasing the MLR22AT with changes to the design that lower the cost without sacrificing performance. 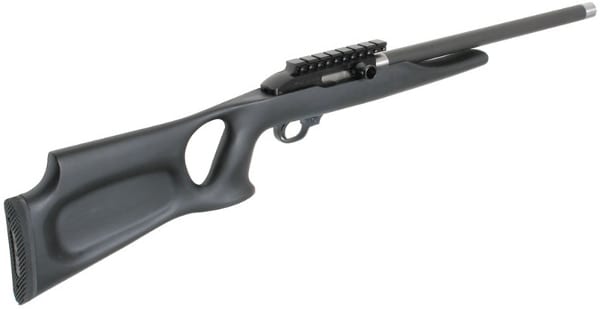 The new MLR22AT has an updated ultra-lightweight polymer stock. This helps keeps the weight of the MLR22AT well under 5 pounds (4.25 pounds to be exact) even though the rifle has what is, in a sense, a bull barrel.

The MLR22AT features a composite design that takes a standard steel barrel and wraps it in “uni-directional graphite” carbon-fiber sleeve. Carbon fiber has terrific heat dissipation properties and tremendous tensile strength, but is not ductile enough on its own to be used as a barrel material. The resulting hybrid is a barrel that’s far more rigid than a standard steel or even bull barrel, while having better thermal properties and weighing far less than an all-steel barrel of the same diameter.

The barrel is also free-floating, which makes this a doubly-accuratized for a semi-automatic rifle. A target bolt-action rifle will still have an edge on the MLR22AT, but this rifle will out-shoot other semi-autos, particularly with regards to rapid fire. The hybrid barrel will stay cooler mag dump after mag dump compared to a rifle with a traditional barrel.

Magnum Research’s .22 uses standard Ruger magazines, both factory and aftermarket. The one-piece receivers are machined from lightweight 6061 T6 aircraft aluminum and are made with an integrated scope rail for optics, and the stock is designed with a raised comb to match. It is parts-compatible with 10/22 triggers, as well.

The redesigned MLR22AT is on it’s way to stores now and will retail for between $500 and $600, which is about $150 less than the previous version. While it is considerably more than most Rugers, the lightweight design and composite barrel more than make up for the difference in price.

If you’re looking for a premium semi-automatic .22 rifle, you need to check out the MLR22AT.