Small-Town Cops Stock Up on Tanks, Helicopters, and Military Gear

Let’s take a look at the town of Lebanon, Tennessee, for example. The police force there serves a town of about 30,000 people, but the public safety coordinator, Mike Justice, accumulated $4 million in military gear over the past 5 years. The town of Lebanon now owns a LAV 150 tank, bulldozers, and truck loaders thanks to Justice’s shopping sprees.

Cobb County in Atlanta has had one opportunity to roll out its amphibious armored tank – not to combat underwater al-Qaeda terrorists, but to capture two men who robbed a convenience store. By the time the tank showed up the suspects had already bolted. This LAV 300, which is worth nearly half a million, is about as useless as it is absurd. A spokesman for the Cobb County Police said, “Nobody has ever taken a shot at it nor has anybody ever taken a shot from it.” Then why do you have it? 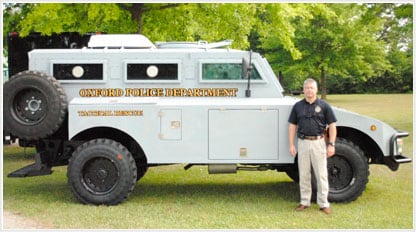 There’s nothing inherently bad about police agencies getting better gear, exactly, but some critics are saying that it’s gone too far. Even though they get this gear for a fraction of the cost, they’ve still got to keep it maintained. Local police in Tupelo, Mississippi acquired a helicopter for $7,500, but its upkeep costs the tax payers $20,000 a year, not including the $100,000 they had to spend to upgrade the chopper. Additionally, Arizona Central found that Pinal County Sheriff’s Office had collected millions of dollars in military gear just to turn around and sell it for a profit, a practice which is strictly forbidden.