MSAR is back and so is their Steyr AUG-style rifle. After a period of financial worry and speculation, the company closed their doors to reorganize and refinance. It wasn’t clear that they’d reopen, but they have, and they’re back with another Steyr AUG-pattern rifle.

Their new rifle is the STG-E4, and is a modern bullpup chambered in two calibers, 5.56 NATO and 300 AAC Blackout. It doesn’t appear to be greatly changed from their original STG-556.

Announced and designed in 2007, the MSAR STG-556 based on the Steyr AUG A3 design, with several noteworthy improvements, small, incremental changes that all together, make the rifle stand out.

The MSAR rifle has a non-reciprocating charging handle, a last-round bolt-hold-open, 1:8 barrel rifling for better performance with a wider variety of 5.56 bullet weights, a number of additional sling points, a modified, improved trigger and an overall weight of half a pound less than the Steyr rifle.

The STG-E4 appears to be made with the same features, having a reversible ejection port, simple take-down system, and using the same quick-change barrel system. One small cosmetic change is the option for more Picatinny rail sections for accessories. 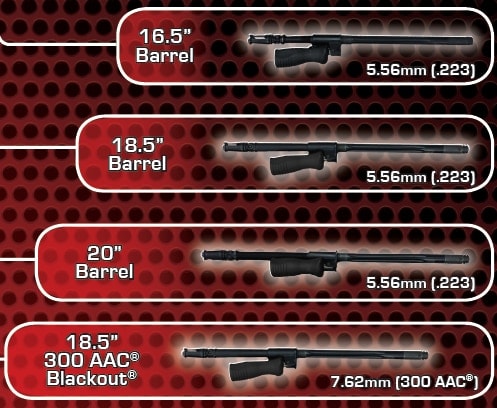 But the biggest change has to be the use of AR-15/M16/M4 magazines. Although Steyr magazines are not known for their flaws or limitations, using standard STANAG magazines really opens the door for many shooters who would pass over an interesting rifle for having to stock up on new mags.

Some have argued that this is one step MSAR should have taken when they first introduced their STG rifle.

“Along with the design improvements, the re-launch of the STG-E4 also comes with a high attention to customer service, and increased parts availability. With a new customer-driven approach, MSAR is committed to manufacturing a high quality product throughout the evolution of growth and change. Founder Anthony Marfione believes that customer experience is built each time a connection is made between the customer and company; the team at MSAR is working diligently to provide structured service and consistent quantities of inventory to better serve its constituents.

“We’ve been given an opportunity to rededicate ourselves to a high standard of excellence, and our team works daily to live up to this standard.”

And we really look forward to MSAR’s upcoming STG-E4, eagerly.