Tactical-Life reports that Staff Sgt. Josh Richmond and Staff Sgt. Michael McPhail will be representing both their country the US Army Marksmanship Unit later this month at the 2012 London Olympic Games

It’s a long road between picking up a rifle for the first time and bringing home the gold medal. Richmond and McPhail have both completed the bulk of the journey, and all that’s left is lifting their guns, nailing the perfect shot, and breaking home the Gold.

Michael McPhail began his shooting career in the small town of Darlington, Wisconsin, which McPhail called “no-wheresville.” What started out as target practice for the upcoming hunting season led to a full-blown hobby and, eventually, state championships. When friends mentioned that the US Army Marksmanship Unit would be a good place to hone his promising skills in double trap shooting, McPhail signed on the dotted line and, as it turned out, they were right! The Army helped elevate his skills to the point where he could rub shoulders with world-class champions at the upcoming London Olympic Games in the men’s prone rifle competition. 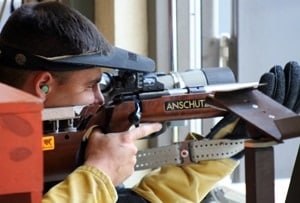 Much like McPhail, Josh Richmond had humble beginnings. He started shooting when his uncle bribed him with a five-dollar bill, and that evolved into 4-H club shooting and then junior national championships. Joining the Army, which he calls “the best decision I ever made in my life, besides marrying my wife Scharri,” was like a dream come true. He said, “I come from a very small town and we are all very patriotic and the chance to shoot shotguns and represent my country is like having my cake and eating it too.”

Both men point to the Army as the reason why they’re on their way to London. McPhail said, “If I wasn’t in this unit I wouldn’t be going to the Olympics.” Richmond agreed, “The way I get to train, the lessons I learned—the Army is why I am here.”

As the Olympics slowly approach, there’s only thing left to say to these promising shooters: “U-S-A! U-S-A!”

For updates, stay tuned to Guns.com. For more information on US Olympic Athletes, visit the official website, while those interested in the London Olympics should visit the website. For all breaking gun news, keep browsing Guns.com’s news feeds.