Appoximately 50 college-age protestors waved anti-Holder signs at the recent Twitter #FireHolder demonstration, even though the Secret Service quickly shut the event down.

Talk Radio News Service reports that 23-year-old Timothy Dionisopoulos co-created a Facebook event urging people to step up and speak their minds on the section of sidewalk outside the White House. Some signs read “Holder: Serial Hypocrite Killer” and “Guns don’t kill people, Holder does.” These protestors really weren’t pulling any punches. To paraphrase Kermit the Frog, “It’s not easy being Erik Holder.”

The protest was short-lived, however. The Secret Service was forced to shut down the demonstration after a backpack was abandoned near the White House’s North Lawn. 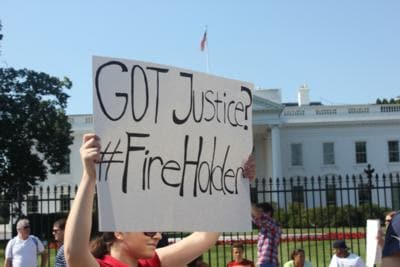 Of course, it’s pretty much the job of the Secret Service to get nervous whenever large crowds gather around the White House, so that’s not really suspicious. Did the Secret Service really lie in order to break up the protest on purpose? Sure, it’s possible, but if they did then they really wasted a trump card on a relatively small one-day protest.