CAA Tactical has recently introduced a new AR-15/M16/M4/STANAG magazine with two visible and one tangible indicators, the MAG17. The MAG17 has a marked window on the side that is marked from eight to 28 and a uses a bright white plastic marker fixed to the spring to let you know what your round count is.

The MAG17 also has a fully-loaded indicator that pops up through the bottom of the magazine that is the same high-contrast white plastic as the round counter, that doubles as a tangible button that you can use to identify a magazine with a full compliment of 30 rounds of 5.56 NATO or .223 Remington, the two markers don’t interfere with either capacity or function. 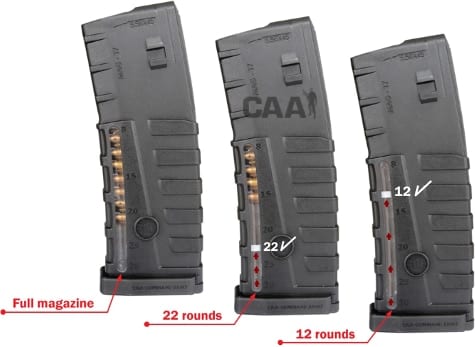 CAA’s MAG17 has a lightweight ridged polymer body that weigh a hair under 6 ounces loaded for the people who keep track of that. It also comes with a dust cover and uses a non-tilt follower, like all good magazines should.

With an MSRP of $19, MAG17s are priced in-line with other similarly-featured magazines, like Magpul’s PMAG MagLevel magazines, which have a suggested retail price of $18, but don’t have the tangible fully-loaded indicator. The magazine is also available in a windowless 20-round version but still has the bottom indicator, the MAG20. 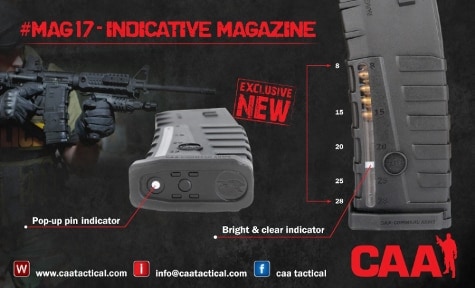 CAA Tactical, or Command Arms Accessories, is an Israeli firm with a strong following in the IDF. Their accessories have been proven in the field and are in service with many soldiers and law enforcement officers.

This is not CAA’s first magazine with a round-counter. They also recently released the CDMAG, with a small window on the rear of the magazine that displays a sprung tape that tells you how much ammo is in the magazine. While it lacks the physical feedback the MAG17 provides, it does display your round count precisely and doesn’t rely on side windows which are obscured by magazine wells. 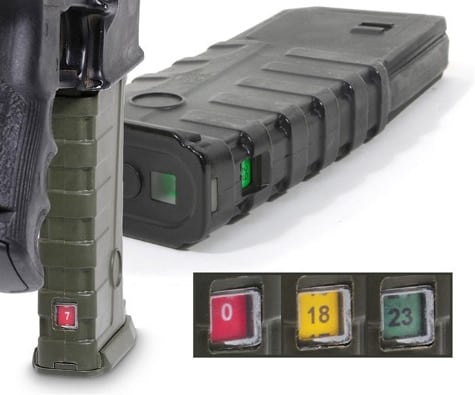 It is a little more mechanically complex than a traditional magazine or even one with a load window, but they work great, if not in the field, than at least in competition. The CDMAG has a suggested retail price of $20.

CAA Tactical fans, what made you go with these over other polymer magazines?