Utah Gov. Gary Herbert along with other state leaders reversed course on Monday, declaring that the state forester does, indeed, have the power to ban recreational shooting in unincorporated areas where the fire danger is extreme.

For weeks state leaders have contended that their hands were tied by state pre-emption laws, which prevent them from instituting any restrictions on one’s Second Amendment rights without the state Legislature’s approval, insisting that all they can do is ask gun owners to wise up and use their heads.

“Now is not a good time to take your gun outside and start shooting in cheat grass that’s tinder dry,” the Republican Governor said a few weeks ago at a press conference.

But after an emergency, 1½-hour, closed-door meeting, the Governor along with legislative leaders and a group of attorneys backed off the ‘we-are-powerless-to-act’ position and decided that a special legislative session was not necessary to empower the state forester with the authority to ban shooting on public lands given the exigent circumstances. 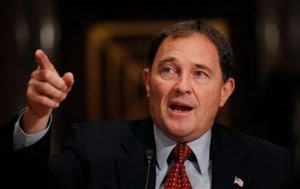 In a press conference, Gov. Herbert called the legal situation “complicated,” adding that, “None of us were into a blanket, one-size-fits-all approach.”

The top legislators in both the House and Senate agreed.

“The state forester has the ability to make these kinds of restrictions in certain areas of the state he believes the data shows is extremely hazardous,” said House Speaker Becky Lockhart, (R-Provo). “We’re not interested in blanket bans or limiting people’s Second Amendment rights to carry firearms in their own interest.”

Senate President Michael Waddoups said he had “total confidence” the no one’s rights were being infringed upon by the decision.

“We’re not trying to take away peoples’ right to enjoy the holidays,” he added, or their right to use firearms for self-defense or hunting.

State forester Dick Buehler told the Desert News that he would be “prudent” in instituting shooting restrictions, even though the state “is experiencing the worst fire conditions in memory right now,” already setting a record for the number of federal assistance grants for fighting blazes.

Still, though, two practical questions emerge from this latest announcement (a) is there hard evidence to suggest that gun owners are to blame for the wildfires and (b) will shooting bans really prevent knuckleheads from acting stupid? 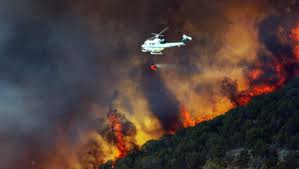 According to state Fire Marshal Brent Halladay, at least 21 wildfires have been started by target shooting this year.

With steel bullets, “You might just go up there and strike a match,” Halladay told the Associated Press, adding that Utah’s wildfire hazard is the worst he’s seen in a 40-year career.

Well, the governor had this to say about the subject of banning fireworks.

“We can meet together and pass law after law after law. But you can’t pass a law that outlaws stupid. We have foolish behavior going on out there,” he said, calling again on Utahns to use common sense to prevent fires.

“We shouldn’t say, ‘Gee, is there a law against me parking my car over some dry weeds and maybe touching off a fire?’ … Most fires are caused by foolish behaviors by us humans,” Herbert said. “You can’t have a law that covers everything.”

By virtue of Gov. Herbert’s own fatalistic reasoning, he should see the futility of implementing any type of shooting ban.  At the end of the day, it’s not going to stop stupid people from doing stupid things… Or will it?