Wilson Combat, well-respected manufacturer of premium handguns, rifles and gun accessories has just brought a .458 SOCOM upper to the market called the Recon SR Tactical. It’s not inexpensive but not out of reach for fans of the heavy-hitting cartridge, and it of course delivers with top-shelf features.

The upper is built on a custom receiver for .458 SOCOM, with a single center feed ramp cut into the barrel extension, as the cartridges are so wide they must be loaded single-stack in the magazine. The upper is crafted from 7075-T6 aluminum and matched with a 6005A-T5 aluminum TRIM (Tactical Rail Interface, Modular) 10.4-inch handguard. The Wilson Combat logo and .458 SOCOM chambering markings are laser-etched into the upper. 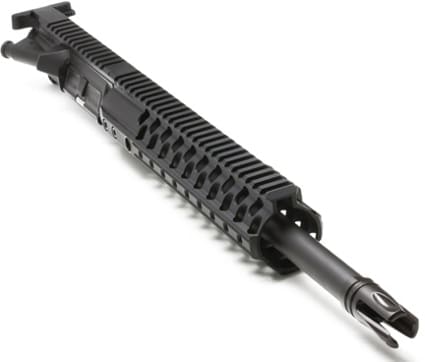 The TRIM rail has a single integral rail at the 12-o’clock position and optional 3-, 6- and 9-o’clockrails in addition to its two quick-detach sling points. Underneath the rail is a free-floating low-profile carbine-length direct-impingement gas system, and inside the receiver the bolt carrier group is finished with an extremely wear- and corrosion-resistant nickel-phosphate (NP3) treatment.

The Recon SR Tactical uses a 14.5-inch barrel with a custom .458-friendly muzzle device, an Accu-Tac flash hider, and is threaded 11/16-inch x 24 for third-party muzzle attachments. Anyone who wishes to build a rifle with this upper must have the flash hider pinned or welded to the barrel first or they will be manufacturing a short-barreled rifle (SBR) which requires a tax stamp and registration with the ATF in order to comply with the National Firearms Act (NFA). 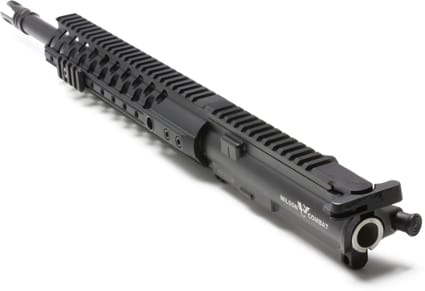 You can see all the details here and purchase a Recon SR Tactical upper on Wilson’s website. The final price: $1,295, which a surprisingly reasonable price for an upper with these features in not just a custom, but exotic chambering. 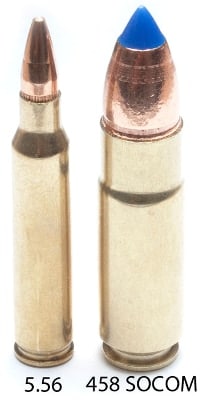 The .458 SOCOM is a tremendous cartridge, loaded to the top it packs a 300-grain projectile and moves it it upwards of 1,900 feet per second (FPS) generating more than 2,400 foot-pounds of energy, almost double the force generated by a 5.56 NATO cartridge. A subsonic round is available, weighing in at 600 grains, moving at 1,000 FPS and generating about 1,300 foot-pounds of energy.

The cartridge was developed expressly for the AR-15 rifles and its variants in an attempt to put as much power possible into a package that used the same basic platform. It even uses standard AR/M16/M4/STANAG magazines, although at a significantly-reduced capacity. A 30-round AR magazine holds 10 rounds of .458 SOCOM. There are a few companies that make .458 SOCOM-specific magazines for jurisdictions where 30-round magazines are prohibited. It also uses standard buffers and springs, but it is recommended to use heavy buffers with this cartridge.

So if you’re looking for something to hunt small trucks and demolish steel targets with, check out Wilson’s Recon SR Tactical.