The NRA-sponsored Youth Education Summit (YES) got a chance to visit Quantico and participate in some Indoor Simulated Marksmanship Training (ISMT), the NRA blog reports.

You may remember that the lucky kids of YES got a chance to visit the National Firearm Museum. As if that wasn’t cool enough, YES also allowed students to use state-of-the-art Marine training technology at Quantico. We hate to say that we’re jealous of acne-stricken teens… but we’re jealous.

ISMT was originally adopted by the Marines back in the 1990s as a way to cheaply offer firearms training. It’s saves the Corps $477 million a year in ammo and maintenance costs.

ISMT utilizes air cartridges to simulate recoil (which must be reloaded the same way that you would reload a magazine), a screen with simulated targets and combat scenarios, and lasers mounted on actual weapons. The M-16A2 was the original ISMT rifle, but they’ve since added a few more weapons to the roster, including M-249 SAWs, Remington 870s, M-9 pistols, and even RPG-7s and mortars. 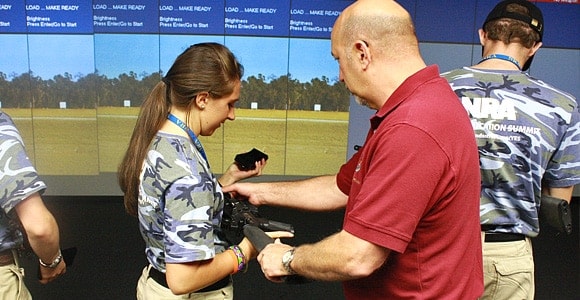 The video games that these students have back home doesn’t even come close to comparing. The simulator can combine scenarios of non-combatants mixed with combatants, hostage situations, and escalation of force scenarios. The YES kids got a chance to squeeze off a few imaginary rounds out of the M-16A2s before heading off to the mess hall.

If the NRA is trying to get our younger generation to be more pro-gun, they’ve found the ultimate strategy. What could possibly be more effective than taking teenagers to the home of the FBI and putting them through one of the most advanced combat simulators on earth?