Fox News reports that the Department of Homeland Security has issued instructions to DHS employees (including Border Patrol agents), requiring that they run away and hide if they encounter a murderous gunman. Yep, you read that correctly. Crazy, huh?

The FEMA-administered course, “IS-907- Active Shooter: What You Can Do,” spells out what to do if they encounter a gunmen while on the job. The three options they suggest are to evacuate, hide out, or take action (but only in dire circumstances).

But wait, the instructions allow for employees to take action? That doesn’t sound so bad.

Guess again! Brandon Judd, a union leader, explains, “If we are cornered by such a shooter we are to (only as a last resort) become ‘aggressive’ and ‘throw things’ at him or her. We are then advised to ‘call law enforcement’ and wait for their arrival (presumably, while more innocent victims are slaughtered).” 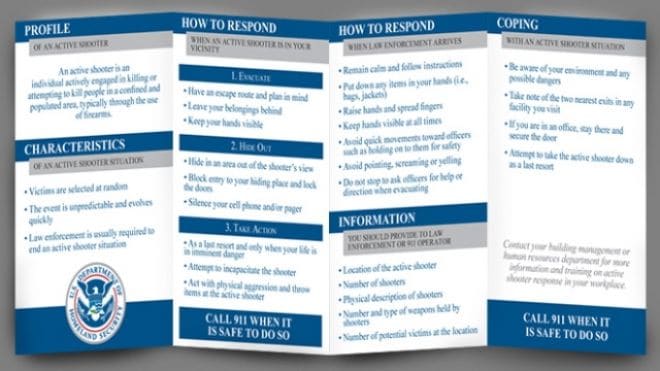 According to Fox News, many DHS employees assumed that the instruction cards only applied to civilian employees, and not law enforcement. Border Patrol agents weren’t thrilled when they discovered that the rule included them, as well.

The website of the Arizona 2544 reads, “It is always comforting to know that for those of us who carry a weapon when we are off-duty, if we should encounter such a situation, stop a shooter and save countless lives, we can look forward to being disciplined or fired by the Border Patrol because we should have run away to hide and then maybe thrown objects at the deranged killer instead of taking action and stopping him with a firearm.” Clearly, the DHS packet did not outline preventative measures for sarcasm.

On the bright side, this should reduce the number of lawsuits that government has to deal with whenever an armed employee stops a gunman. Reducing settlement payouts from the government is more important than reducing the number of people killed by deranged gunman, wouldn’t you say?