Which Water Gun is Best For You?

The folks over at Gizmodo did some rather informal water gun testing to see which aquaarm (get it?) is the best pick for backyard showdowns.

Coming in at third place is the Nerf Super Soaker Electrostorm, which doesn’t pack as much as a punch as the name might imply. The gun utilizes a motorized battery rather than elbow grease to generate water pressure, and the dinky motor just can’t produce a very impressive stream. Still, its compact size and comparative light weight might make it a favorite among people with concealed carry water gun permits who want to carry around a water gun for self-defense. If you ever plan to head into battle, though, you’re better off carrying something with a bit more oomph.

Second place goes to the Nerf Super Soaker Lightningstorm. It’s got a gigantic 35-ounce barrel drum, slightly reminiscent of a tommygun. You can be protected by the built-in blast shield as your introduce people to your little friend, though the Lightningstorm still isn’t much of an upgrade over the Electrostorm. Its range, Gizmodo found, is not that much more impressive than the Electrostorm. It should still be a great pick for people in the 10-year-old mafia. 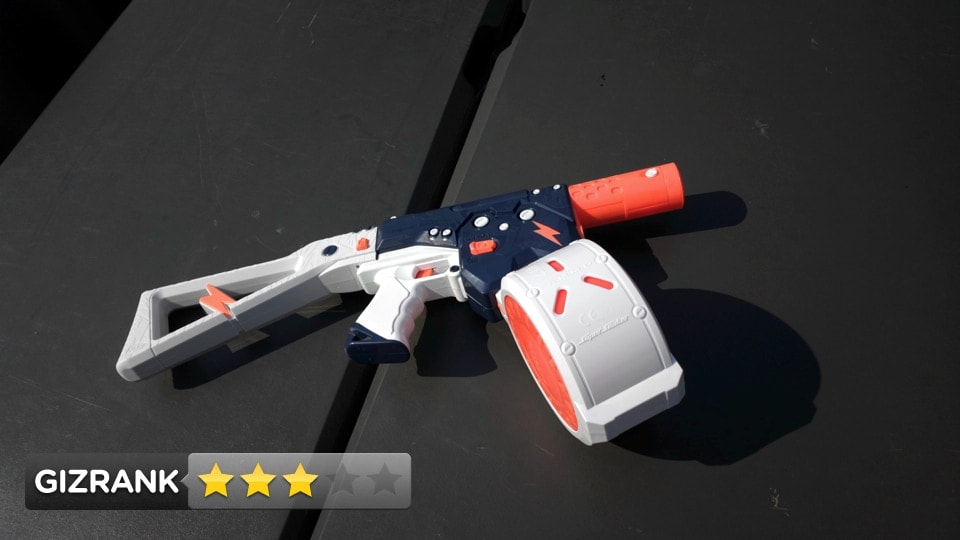 Water Warrior Colossus proved to be the dark horse in the competition when it grabbed first place. You’d think that the Super Soaker brand would, well, soak all of the competition, but the off-brand Water Warrior proved that newer isn’t necessarily better. Its pump-action pressurizer launched water nearly as far as 40 feet, about 15 feet farther than the lightning storm. Firing this hefty weapon might make your arm tired, but who cares when you’ve got this much power?