Winchester Brings Back their Model 94 Takedown

Winchester is bringing back a classic design and is reintroducing their takedown version of the Model 94 lever-action rifle, the Trails End. The Trails End uses the same takedown mechanism designed by John Browning for the Model 1894, and is easy to operate and fast to take apart and put back together.

The rifles are compact and lightweight taken apart, based on the Model 94 Short, with a capacity of 8+1 in .30-30 Winchester 6+1 in .450 Marlin. These cartridges are both great hunting cartridges, .30-30 Winchester being used for medium game for over a century and .450 Marlin being a smokeless powder cartridge developed to replicate .45-70 Government in a smaller, lighter package, which is well-suited for North American big game.

Regardless of what it’s chambered in, the Trails End weighs 6 pounds, 12 ounces and has a 20-inch barrel. Other features include the use of rounded locking bolts to make the lever throw smoothly, radiused lever edges to spare your knuckles and a relieved bolt to reduce the amount of force needed to cycle the action. 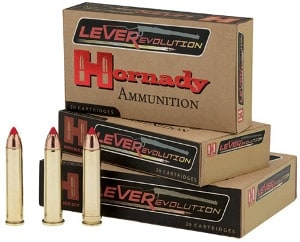 All in all, this is a traditional rifle with modern enhancements to make it cycle more easily, function more reliably, and withstand more abuse than it’s historic counterparts. In addition to the deep bluing and satin-finished walnut furniture, the Trails End features hardened steel internals including the loading plate and articulated cartridge stop to prevent damage to the ammunition.

Other specifications of the Trails end include a triple-checked button-rifled barrel, an overall length of 38 inches and a length of pull of just 13.5 inches, short enough for all users as well giving the user the option of adding a recoil-absorbing buttstock extension.

The Trails End is testament to the continuing success of John Browning’s work and is perfect for anyone who wants to pack in a rifle rather than sling it over-shoulder, and is perfect for both hunters and recreational shooters passing through thick foliage or just looking for a little discretion with their firearms. Whether you’re a long-time levergun lover or looking for a takedown rifle chambered in something with a little more punch than .22 Long Rifle, check out Winchester’s old and new Model 94 Trails End Takedown.