Last week, the Brady Campaign to Prevent Gun Violence released a 60-plus-page report titled, “Guns in Sports: How Guns Have Affected the Athletic Community & What It Tells Us About America’s Gun Violence Crisis.”

By profiling athletes who have been murdered by criminals with guns or who have committed suicide, using firearms, the report claims to use gun violence in sports as a “window into our nation’s larger gun problem, to raise awareness, and lead to action that can help save lives.”

The truth is one doesn’t need to read the report to see where it’s headed.  If one is at all familiar with the Brady agenda, then he/she already knows that this report is a seriously flawed attempt to blame inanimate tools and the “lack of regulation” of those tools for the woes of man. 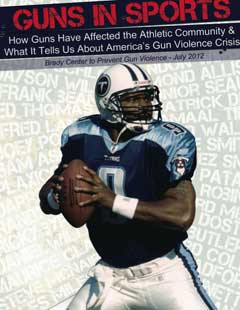 Take for instance the profile of Denver Broncos cornerback Darrent Williams, who was tragically shot and killed on January 1, 2007 when his rented limousine was shot up in a drive-by shooting.  Here is how the Brady Campaign reports the way in which the shooter obtained the firearm (emphasis is Brady’s):

Denver police later arrested and indicted Willie Clark, a felon and a member of a Denver area gang, in connection with the murder. Clark is reported to have gotten the gun from his friends, who were also involved in his gang, although the details of how Clark’s gang obtained the gun are murky (as is the case with many criminals’ guns).

The implication in this description hews to the larger theme of the report – which highlights the stories of Steve McNair, Sean Taylor, Michael Jordan’s father, Serena and Venus Williams’s Sister, Dallas Green’s nine-year-old granddaughter, among others – that in a “nation with over 200 million firearms, inadequate gun laws make it far too easy for dangerous people to acquire the means to kill.”

Instead of getting caught up in the usual pro-gun v. pro-gun control debate, which involves repeating the same basic truth: gun control only punishes law-abiding citizens, not criminals, who by their very nature, flout the law, I’ll – in an effort to push the dialogue forward – agree with the Brady Campaign premise, that it’s far too easy for dangerous people to acquire the means to kill (not because of lax gun laws, but because of the ubiquity of firearms).

One probable theory is the prohibition of drugs.

As former NRA lobbyist Richard Feldman pointed out in a Huffington Post article some months back, “Gun owners should understand that much of the impetus to over-regulate and ban firearms would evaporate overnight–along with much violent crime–if they would effectively join forces with the anti-prohibition activists to eliminate the lucrative black market for both drugs and guns by legalizing marijuana.” 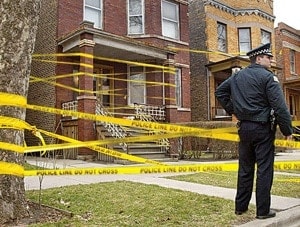 I think there’s some truth to this statement.  I think gun violence is in large part driven by the illegal drug trade in this country.  If the Brady Campaign is serious about reducing gun violence in this country, they should be examining ways to reduce the number of “dangerous people” as opposed to advocating for more ineffectual regulation (would tougher gun laws have really saved the life of Darrent Williams?)

In a sense, I’m challenging the Brady Campaign to put productive options on the table.  As a pro-gun advocate, I’m willing to give legalizing marijuana a try.  The question is, are they?

The Brady Campaign can continue to keep publishing these bogus reports and we can continue to point out their many shortcomings (for a full, in-depth refutation of the ‘Guns in Sports’ report, check out this Truth About Guns article), but if the goal is to really stop violence, then we need to start taking a look at real solutions.  As Feldman concludes in his article:

“Inevitably, just as drug and gun crime are intertwined, so are the government’s efforts to repress both. Guns are here to stay and so are drugs.  Let’s learn to live more safely with both rather than challenge their existence in unproductive political screaming matches that serve the interests of the naysayers, the doomsayers but not you and not me.”