USS Iowa Begins Life as a Museum Starting this Weekend

The WWII battleship USS Iowa will begin its new life as a museum starting this Saturday, KALW reports. 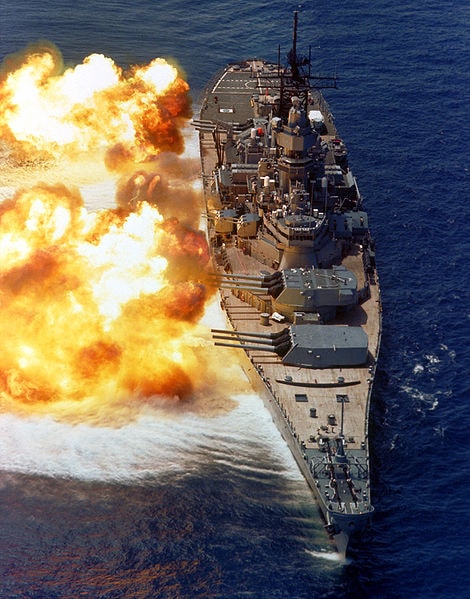 Usually, museums are new buildings that are filled with a bunch of old relics to give visitors a window to the past. The USS Iowa doesn’t need to be stuffed with historical pieces in order to qualify as a museum; it’s a museum simply by virtue of what it is.

The USS Iowa was initially commissioned by the Navy for WWII, though it also sailed the seas during the Cold War and the Korean War. It even once carried President Franklin D. Roosevelt across the Atlantic towards Tehran to meet with Winston Churchill and Joseph Stalin, where the Big Three planned the invasion of Normandy.

Once the Iowa opens its doors to the public on Saturday, visitors will be able to see Roosevelt’s personal room, the ship’s 16-inch .50 caliber Mark 7 guns, and the Iowa’s labyrinthine underbelly. KALW Radio visited the ship as it awaits its museum debut in the Port of Los Angeles in San Pedro. They spoke with Mike McEnteggart, a former crewman aboard the Iowa, who bragged about the guns: “This is the right gun, Turret 1. It’s 67 feet long, brother. Look at the size of it. I could put you in this.”

It’s about time that California got a decent bit of gun news. Look on the bright side, Californian readers: it may be illegal to use a personal firearm for just about anything in California, but at least you get to look at cool Navy guns. We suppose that every dark cloud has a gunmetal lining.

For updates, stay tuned to Guns.com. For more information on the USS Iowa, visit the website. For all breaking gun news, keep browsing Guns.com’s news feeds.