On Saturday, Attorney General Eric Holder told a major Hispanic advocacy group that the Justice Department would aggressively protect and defend the civil liberties, voting rights and safety of Latinos in the United States.

During his address, Holder made it a point to call out Maricopa County Sheriff Joe Arpaio, whose controversial posture toward illegal immigration has landed him in hot water with the DOJ, which filed a lawsuit back in May arguing that the five-term Sheriff’s polices on immigration go too far, labeling them “unconstitutional” and part of a “pattern of discrimination” against Latinos. 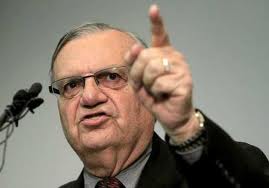 “As many of you know, nearly two months ago — after a lengthy investigation into the Maricopa County Sheriff’s Office in Arizona — and following numerous attempts to work with the sheriff there and his colleagues to address the concerns that our investigation raised — the department was forced to take an unusual, and extremely rare, action,” Holder told members of the National Council of La Raza (NCLR) at a convention in Las Vegas over the weekend.

“The Civil Rights Division had no choice but to file suit against Sheriff Arpaio, the Sheriff’s Office and the county for discriminatory police and incarceration practices that violate the constitutional rights of Latinos in Maricopa County. These policies simply have no place in responsible and effective law enforcement. And they must not — and simply will not — be tolerated,” Holder declared.

Holder’s speech also touched on the Supreme Court’s decision to uphold the “papers, please” provision in the Arizona immigration law (SB1070) despite ruling that other sections are unconstitutional.

“I remain seriously concerned — as many of you do — about the potential impact of other sections of the law, including the requirement for law enforcement officials to verify the immigration status of anyone who is lawfully stopped or detained when there is any reason to suspect that the person is here unlawfully.”

“Let me assure you, the Justice Department will monitor the impact of this and other measures to make certain that they do not conflict with federal civil rights or immigration laws,” Holder added. 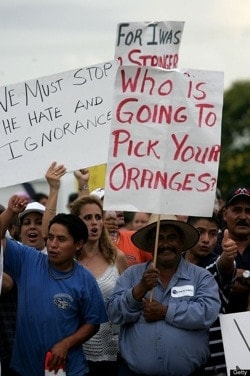 With the Obama Administration in full-campaign mode, it seems as though Holder is attempting to do his part.  As such, he lauded efforts by the Department of Homeland Security to provide work visas for undocumented workers who came to the states illegally as minors.

Such young people generally fit characteristics defined by the Development, Relief, and Education for Alien Minors (DREAM) Act, as pointed out by HSToday.com.

“There’s no question that this action represents a significant — and long-overdue — improvement to our nation’s immigration policy.  And we all can be encouraged that President [Barack] Obama and other members of his administration, including me, will keep working with congressional leaders — from both parties — to advance the passage of critical legislation like the DREAM Act and comprehensive immigration reform, in order to bring about fair and lasting updates to our immigration system so that it meets our 21st century economic and national security needs while continuing to honor our rich traditions and diversity,” Holder said.

Not surprisingly, Holder’s prepared remarks did note delve into the role the Justice Department played in the fatally flawed Operation Fast and Furious.  Nor did he mention the fact that Congress voted to hold him in criminal contempt for his failure to turn over critical documents related to the gunrunning operation, which allowed over 2,000 firearms to fall into the hands of violent Mexican drug cartels.

While these issues raise legitimate questions about the DOJ’s ability to keep U.S. citizens (of all races, ethnicities, etc.) “safe,” especially those living near the border, one can assume that on the campaign trail, there are certain facts that are better left unsaid if one wants to keep his job