Three-star General William Ingram started the NRA Championships off with a bang by performing the First Shot Ceremony.

General Ingram, who received his third star while he was stationed in Washington DC last November, began the ceremony by addressing the crowd and recounting his long history with guns. He said, “I was taught to shoot by my grandfather when I was about six or seven years old. We had an old, single shot .22 bolt action rifle that I think was his grandfather’s. I learned how to shoot and about firearm safety at a very young age.”

Let that be a lesson to all of the parents out there: give you kid a gun at an early age. Who knows? Maybe they’ll grow up to be a 3-star general or an Olympic athlete some day. 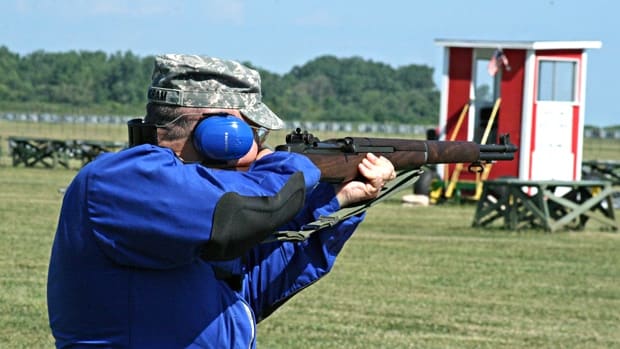 Ingram added that he couldn’t even begin to remember all of the shots that he’d fired throughout his life, but he offered a particularly apt quote from President Theodore Roosevelt, “He said that the shots that hit are the shots that count.”

Then, Ingram picked up his M1 Garand, took aim, and fired a single shot. His target, which was a few hundred yards downrange, exploded in purplish smoke. Without a doubt, that’s a shot that counts.