Glock Hunting: The Handgun for Hunters?

In a recent press release, Glock promoted the Glock 30 SF for hunters. The message was clear: you never know what you’re going to encounter when you’re in the woods, so bring a handgun with you, and carry a gun chambered in a caliber suitable for taking game.

“Hunting season is right around the corner, and that means it’s time to make sure you’re ready to go. Your packing list should include (among other things) a first aid kit, appropriate attire, sufficient sustenance, camping materials (if applicable) and of course, your pistol. In the wilderness, a GLOCK provides protection against unexpected threats while hunting. A sidearm must be able to endure any given situation, climate or environment—no matter how extreme.

“By instilling hunters with confidence, GLOCK empowers them to safely pursue the passion of hunting. A favorite amongst hunters is the GLOCK 30SF. The G30SF is an extremely powerful semi-automatic handgun chambered for a caliber suitable for taking small, medium and some large game animals.” (Emphasis ours.)

The first part of the message is indisputable. Handguns are extremely fast to draw, acquire a target with, and shoot rapidly. The qualities that make them good sidearms aren’t wasted in the woods, where help is particularly far away. It’s the latter part of the release that has drawn scrutiny.

Glock opened a can of worms when they brought up the subject of handgun hunting, with many outdoorsmen and women of the opinion that handguns are inadequate for a wide spectrum of game, and others quick to point out that handguns are still many times more powerful than other types of hunting weapons, like bows and crossbows. Even the Glock 30 SF—although it is a compact handgun with a 3.8-inch barrel, chambered in .45 ACP with a capacity of 10+1, it’s no slouch in the energy department.

But it’s not king of the hill, either. Handgun hunters have long used high-power revolvers, chambered in calibers starting with .357 Magnum and going up from there, loaded with cartridges charged to levels that greatly exceed what automatic handguns can handle, like hot .44 Magnums which can exceed some .223 Remington loads in terms of projectile energy. 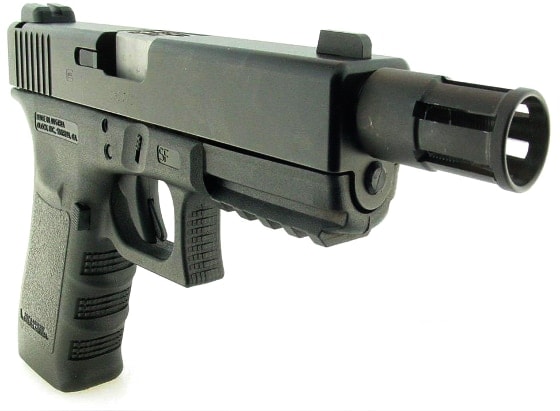 We believe there is a time and place for handgun hunting. Besides being an interesting skill set, there are some advantages of hunting with single-shot, automatic pistols and large-frame revolvers. It is naturally well-suited for hunting in tight quarters. Handgun rounds lose energy a lot faster than rifle rounds, and are most effective at close range. This makes them a lot safer to fire in places populated with a lot of hunters in a small area, especially if line-of-sight can be a problem.

But different cartridges exist for a reason, and even though shot placement is key, there are plenty of situations where we’d reach for a rifle or shotgun before we’d pick up a compact .45, or even a full-size 10mm. That being said, it’s not a terrible idea to carry a handgun when you’re hunting. We’re fans of woods-carry.

Do you hunt with handguns? If so, what gun and what game? And who here’s going to (or has already) run out and get a Glock 20 for handgun hunting? What game do you think is suitable for hunting with .45 ACP?