Swiss suppressor manufacturer, in a joint effort with Kriss, has developed a silencer specifically for the Kriss Vector carbine and submachine gun. The suppressor has been in various testing and development stages for some time, and is now ready for public consumption.

At SHOT Show this year, we sat down with Kriss and talked to them about the Vector, future Kriss firearms, and the Defiance HPS 4GSK, the suppressor made specifically for these firearms. The HPS 4GSK was designed to meet two criteria.

The first requirement for the HPS 4GSK was that it not change the point of impact of bullets fired through it relative to how the Kriss was sighted in without a silencer. Many suppressors change the trajectory of bullets, requiring the user to adjust their optics and iron sights when installing or removing it. The HPS 4GSK minimizes this effect, to the point where with most bullet types it’s a non-issue. 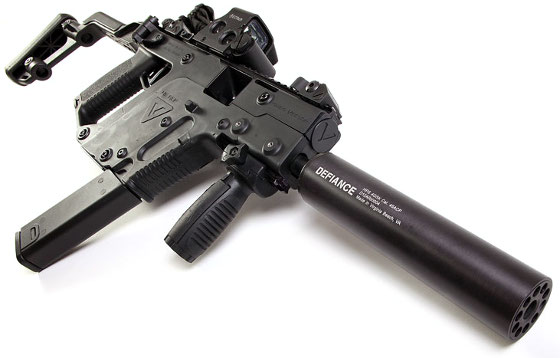 The second standard is performance-based. The HPS 4GSK is a pretty big can, as it’s designed to bring noise levels down below levels that require the user to use ear protection, by OSHA and MIL-STD-1474D standards. This means that at most the user is subject to 114 decibels of noise.

The resulting suppressor is quite large compared to others. It is 7.7 inches long, 1.8 inches in diameter, and weighs 1.1 pounds. The HPS 4GSK uses both steel and aluminum baffles designed to maximize the life of the can, and the baffles are housed in a 6061 T6 aluminum with a Type III mil-spec anodized finish.

The HPS 4GSK suppressor is threaded for the Vector, so it uses M16x1 Left Hand threads, and is compatible with every model, the submachine gun, the short-barreled rifle, the pistol and the carbine chambered in .45 ACP, as well as any other .45 caliber carbines with compatible threads.

The HPS 4GSK will be distributed in the U.S. by Kriss-USA, and the price has not yet been announced but we expect it to be around or under $1,000.