The personal sidearms of the most notorious crime duo are up for auction, among a couple of other close personal items. The pistols, a Colt Detective Special and a Colt M1911 Government Model belonging to Bonnie Parker and Clyde Barrow, respectively, will be auctioned off by RR Auction this September.

Parker’s Colt was taken off her thigh the morning of her death. Along with the revolver is a notarized letter from former Special Texas Ranger Frank Hamer, Jr., which reads:

“On the morning of May 23, 1934, when my father and the officers with him in Louisiana killed Clyde Barrow and Bonnie Parker. My father removed this gun from the inside thigh of Bonnie Parker where she had it taped with white, medical, adhesive tape. My father said that one reason she had the gun taped to the inside of her leg was that, in those days, no gentlemen officer would search a woman where she had it taped… Sometime later, my father gave this gun to Buster Davis who had been a Texas Ranger and was, at the time, an FBI Agent.” 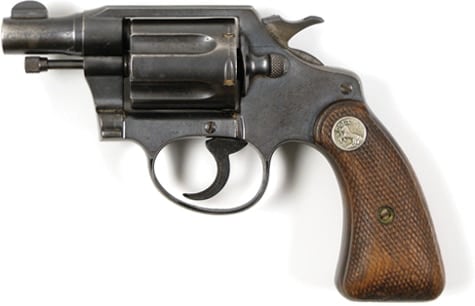 Along with the signed and notarized letter is a framed handwritten note from Frank Hamer, on the back of a Texas Ranger expense account form that reads “Aug/1934 Davis hold onto this. Bonnie was ‘squatting’ on it. Frank.” The Model 1911 was pulled from the late Barrow’s waistband the same morning, and includes a similar letter to its authenticity.

The Colt Detective’s Special is chambered in .38 Special and has a 2-inch barrel. It has a standard round butt frame, and bluing that has developed a fine patina. It’s still in good working condition, although it has seen a good amount of wear.

The Colt M1911 is chambered in .45 ACP and was USGI but has light scratchings where the “U.S. Property” mark was removed. All of the other markings are in excellent condition, along with the double-diamond grips. The .45 also has developed a patina but has a clean bore and is also still in good working condition. 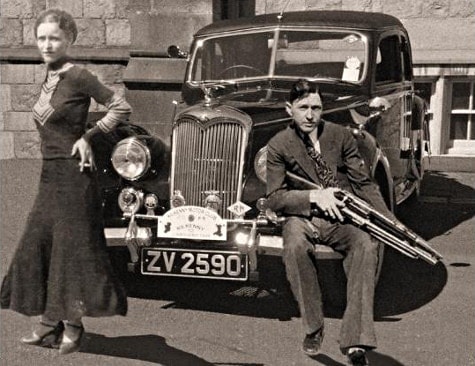 One interesting thing about Barrow’s 1911 is that it is believed to have been stolen from the Beaumont, Tex., Federal Armory.

Of all of the guns that Bonnie and Clyde used over the years, these are literally the ones they were closest to when they were gunned down, May 23, 1934 in Bienville Parish, La. Along with the two handguns are two personal items taken from their car, Barrow’s pocket watch and Parker’s cosmetics case.

The pocket watch is made by Elgin, constructed with 10 karat gold and measures 1.75 inches in diameter. The watch comes with a letter from his sister confirming that it was his. The cosmetics case is a simple light brown leatherette case with a mirrored top cover. 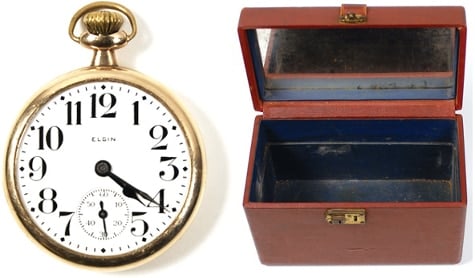 According to Hamer, “This case was obviously used by Bonnie Parker for personal grooming purposes. It was about the only feminine touch item in their possession.”

The auction is expected to fetch up to $200,000. A previous auction showcasing the pair’s Winchester Model 1897 and Thompson submachine gun went for $210,000 this January.

Assuming you owned these guns, the question becomes… would you shoot them?