Operation Golden Cargo Sends Millions of Bullets Across US

The Army reports that thousands of troops from the Army Reserve, Army National Guard, Navy Reserve, and Marine Corps Reserve units are participating in Operation Golden Cargo. The two-week exercise, which started July 9, will transport more truckloads of ammunition than you can shake a stick at.

Lt. Col. David Gayle, battalion commander of the South Carolina National Guard 1050th Transportation Battalion and Task Force Wildcat, explained Operation Golden Cargo: “Golden cargo is the simple movement of ammunition out of the Blue Grass Army Depot here in Lexington, Ky., to other depots within the United States. The purpose is to move ammunition to other depots for shipment to other parts of the United States Central Command to support the war fight for overseas contingency operations.” 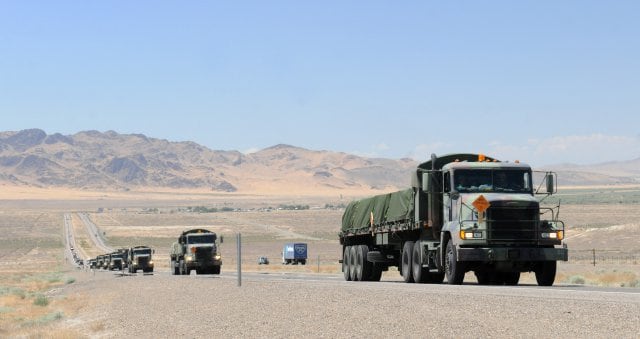 Transporting so much ammo throughout such a huge area and across multiple branches of the US military is a logistical nightmare. He added that safety would be one of their utmost concerns, “The biggest thing they need to do is to be safe. They need to look out for each other, watch for the hazards, and be able to mitigate those hazards.” Drives are also to stop and rest after certain intervals.

Even though Operation Golden Cargo is an immense undertaking, a bunch of soldiers and workers involved in the event are looking forward to it. One such military man, Capt. Robert L. Blankenship, said that the men are eager to help supply US soldiers, and Pvt. Phil C. England of Payson added that it would be a great opportunity to get in some real-world experience.

Hopefully, the Operation will continue without a hitch. After all, an army may march on its stomach, but it wins on its guns and its bullets.