On Tuesday, Steve from the Firearm Blog posted the following video of Iranian soldiers testing out what appear to be Steyr HS .50-caliber sniper rifles.

As Steve pointed out, in 2004-05, the Austrian company Steyr-Mannlicher sold approximately 800 rifles to Iran, included in that transaction was the single-shot bolt action HS .50.

Despite complaints from the U.S. and U.K. officials that these rifles could fall into the wrong hands and be used against Coalition forces in Iraq and Afghanistan, the Austrian government approved the sale, citing Iran’s declared intention to deploy the weapons with anti-terror and counter-drug units.

It took no more than two months for news to surface that the rifles were being used against American troops.  Allegedly, an Iraqi insurgent used one of the rifles to kill an American officer traveling in an armored vehicle.

In 2007, news got worse when the Daily Telegraph reported that more than 100 of these .50 cals were recovered by American troops during raids in Iraq. 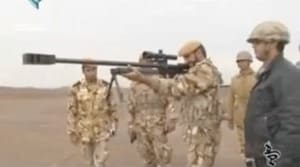 “Although we did make our worries known the sale unfortunately went ahead and now the potential that these weapons could fall into the wrong hands appears to have happened,” a Foreign Office spokesman told the Telegraph in 2007.

However, since those reports in early 2007, there has been little evidence to suggest that those rifles recovered by U.S. troops were the ones that Steyr sold to Iran.

In fact, Steyr CEO Franz Holzschuh told reporters that he has never been contacted to compare serial numbers and verify that the weapons recovered were part of the Iranian shipment.  He added that the patents for the HS .50 expired years ago, and knock-offs are produced in several different countries.

Putting all that business about Iraqi insurgents aside, I’m not sure I feel any better knowing that Iran has had five years to become intimately familiar with shooting armor-piercing .50s.