CBS San Francisco reports that California State Senator Leland Yee’s gun control bill is under fire from the local gun community. People are expressing their outrage over SB 249 through billboards, merchandise such as mugs and t-shirts, and racially-charged threats sent to Yee’s office.

Yee introduced the bill after he saw a documentary about the bullet button, which allowed certain assault rifles to slip through a loop hole in California law. His bill originally was worded to ban the bullet button, but he recently amended it to only get rid of conversion kits such as the mag magnet. After all of the harsh opposition, Yee concluded that he had to water down the bill if he wanted it to pass, “Given all the opposition we have had thus far, I think that this probably would be a way that we can craft a bill that would pass muster.” 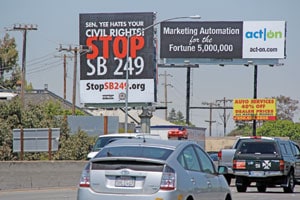 We’ll let you guess what California gun rights advocates think of the bill (hint: they hate it) but gun control proponents aren’t on board with it, either. President of the Brady Campaign to Prevent Gun Violence Dan Gross, in addition to committing a malapropism in his interview when he misused the word “conscious,” thinks that the bill just won’t cut it. He said, “Even if Senator Yee’s legislation is passed, there would still be a whole bunch of guns that it doesn’t apply to.”

Regardless of what happens, California lawmakers will probably have to battle it out in court. The Brady Campaign promised to file a lawsuit if the Attorney General doesn’t change the state’s regulations on assault rifles, and Calguns has already sued the California DoJ on the grounds that the law is unconstitutionally vague.