I was leaving work the other night, and it dawned on me, I really wish I had my gun on me right now. Lest you think I was being a bit paranoid, the job I’m speaking of is my work as a professional musician, playing at a club. For my solo act, I’ve got to pack and move a P.A., guitars, keyboard, and assorted effluvia, loading these expensive pieces of equipment in and out every gig. It usually works out that I’m one of the last guys out of the venue, hence the desire for a gun.

The loading areas of bars and nightclubs, share one common characteristic – they virtually all look as though a movie production scout would find them to be the perfect place to stage a mugging, rape, or murder.

However, even if you have a concealed handgun license, you’re not allowed (in most states) to carry, where alcohol is served, which got me to thinking about all the many places where you can’t carry, but likely wish you could.

Guns and alcohol don’t mix. I get it and I trust any serious gun owner feels the same way because the last thing in the world people want is some drunken idiot to up to the ante in a barroom dispute by pulling out his 9mm—the mother of all bad ideas and makes gun owners look bad.

But what about those of us who make a living at bars and restaurants and do not imbibe at work? Making us working, teetotalers leave our lawfully carried weapons at home leaves us open to the kinds of people that look at the rules we are following as something that “doesn’t apply to them”. These are the kinds of people that think it’s perfectly acceptable to settle an argument with a gun, or to rob a hard-working musician of his daily bread by jacking him in the parking lot.

Now you might argue that if you live in a state that doesn’t allow you to carry in a bar when you’re not drinking, you might be better served to carry concealed anyway. It’s the old “better to be judged by twelve than carried by six” argument. I disagree.  If I’m bankrupted by defense lawyers or incarcerated for years, I’m no more good to my young daughter than I would be if I’d been shot dead.

My compromise is to make certain I take every precaution I can (tactical light, pen, and knife on my person and keep those Spidey-senses on Condition Yellow), and be smart about things. Situational awareness rocks. Park near a streetlight, leave with other people, that sort of thing. If I’m playing in what my ex used to call a “transitional neighborhood” (read: “bad part of town,”) I’ll sometimes keep a gun locked in my car, where I can presumably get to it – maybe – if needs be.

But bars aren’t the only places you might wish you had a gun. High up on my list: schools and hospitals. 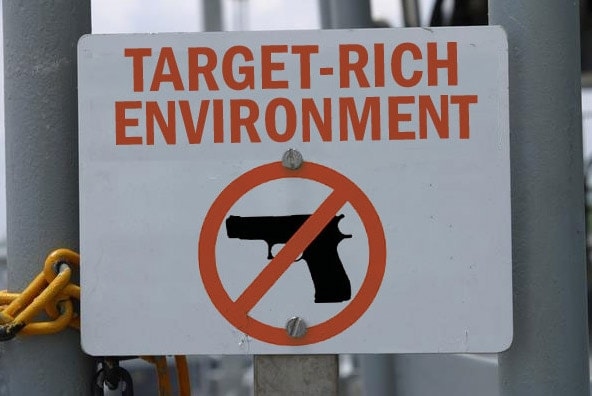 I’m of the belief that declaring something a “GUN FREE ZONE” is tantamount to painting a big target on the place, like a sign that reads “TARGET-RICH ENVIRONMENT” and I don’t think I’ve been to a hospital in this country (and many others) that didn’t have them posted in spades. If you’re a psychotic, bent on taking as many people with you as possible on your Day of Destruction, there’s nothing quite like knowing there will be no possibility of armed resistance to get the ol’ homicidal juices flowing.

This is why every time I occasion to visit an emergency room, I’m constantly scanning the crowd to see if anybody looks as if they are about to slip their chain and go all street rat crazy on the rest of us. Of course, that would be cold comfort if Mr. Crazy Person just walks in, guns a-blazin,’ like some deranged Rambo type, but since most mass shootings involve the element of surprise, the less surprised I am and the more time I’ve got to take cover, the better are my odds of survival.

In our post-9/11 world, it suddenly seemed possible that some insignificant school in a sleepy little burg like Amarillo might be a terrorist target (not likely, mind you, but possible).

My daughter used to attend a charter school in Amarillo. It was located in what had been a strip center—a long, low building with ceiling-to-floor, plate glass windows, with a parking lot in front of the whole thing. I played out scenarios in my head, whereby some terrorists in a truck drive through the front of the building, jump out and take the entire school hostage (sound paranoid? I suppose it does, but ask the grieving parents in Beslan how they feel about paranoia after the Chechens did a number on their school). 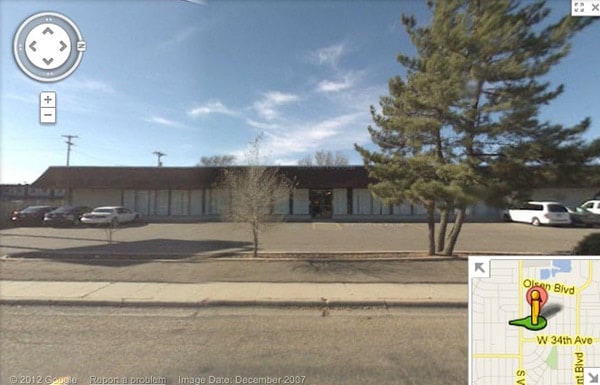 Now I’m a Christian, and I firmly believe in putting things in God’s hands. But I also believe in the familiar words o’ wisdom attributed to Ben Franklin: “God helps those who help themselves.” I see nothing wrong with taking prudent steps to make a “soft target” a little more fortified and harder to hit.

When the Texas legislature took up this very issue in their last session, opponents of gun rights were screaming about putting guns in the hands of irresponsible underclassmen (though it seems to be doing fine in Colorado).  Funny, but concealed handgun permits are only issued in Texas to those over the age of 21, so even allowing concealed handgun permit holders to carry their weapon on campus would not have resulted in any students under the age of 21 being able to carry in the first place. As it stands now, not even faculty can legally carry  And that’s an invitation to disaster.

After hospitals and schools, the next thing I considered was government buildings, especially anything related to our justice system.

I get why you’d want to keep guns out of courtrooms, especially family court. An abusive spouse, an emotionally-charged divorce or custody case – that sort of thing is ripe for a tragedy involving guns.

But what about when someone literally “goes postal” the post office?  What about city hall? Libraries?

At least the courts do more than put up a sign.  Metal detectors at least improve the odds that anybody prone to violence will do it outside the courthouse (having said that, your biggest risk at a courthouse would be getting to and from your car, since you’re obviously unarmed).

Like courthouses, airplanes, too, are one of those places that I get why you wouldn’t want a surplus of guns, at least not in the hands of terrorists bent on taking down a plane, but I would still like to know there’s a gun on-board in the hands of someone who knows how to use it.

What makes a plane different? First of all, flying at 30,000 feet, if you introduce a hole into a fuselage, you’re liable to have a massive failure of the hull, and a few passengers that ignored that pesky seat belt admonition will go flying out the newly-created sunroof.

Oh, and if one of those stray bullets happens to perforate the crew, it’s not like some passenger is gonna know how to land a crippled 737, so I concede that keeping loaded guns out of the hands of passengers is at least understandable in that context (keeping them out of the hands of pilots is less so, but that’s a topic for another time). And again, at least the government takes a stab at keeping weapons off planes (with metal detectors and full-body scanners).

Aside from bars, restaurants, schools, hospitals, airplanes and certain government buildings there’s one last place that I’d say I really want access to my gun. That would be at any business that posts signs stating that guns are not welcome on the premises.

To me, these are the moral equivalent of a “KICK ME” sign taped to someone’s back at a party. Just like locks keep honest people honest, all a sign does is to keep We the Sheeple in line. It does nothing to deter a determined criminal, nut-job, or other miscreant, bent on shooting up the joint. I highly doubt, the guy who’s been acting erratically and just got fired is really going to think back to that sign, when he runs out to the parking lot and suits up for a little live target practice.

It’s unnecessary and insulting to the customers who could have helped the store from getting robbed.

Generally speaking, cutouts in the concealed carry laws across the country sound reasonable. Unfortunately, the practical application of these “reasonable” ideas have far too often led to tragedy. The problem with these rules is that they do nothing to stop those that have murder on their minds, but completely disarm anyone who might be otherwise equipped and so-inclined to stop the bad guys in their tracks. Maybe we should stop passing laws that sound good, and instead allow a little common sense into the debate.