Last week, the Bureau of Alcohol, Tobacco, Firearms and Explosives amended its Form 4473, the Firearms Transaction Record, so that it now requires purchasers buying a firearm from a Federal Firearm Licensee (FFL) or gun dealer to identify if their “ethnicity” is “Hispanic or Latino.”

“Failure to do so will cause potential criminal prosecution and a denial of Second Amendment Rights,” author and attorney Evan Nappen, who first reported the change, wrote on the Pro-Gun New Hampshire website. “The Form 4473 has been around since 1968, but never before has one ethnic group been singled out where individuals have to affirmatively state whether they ARE or ARE NOT a member.”

“What if the ‘ethnicity’ question demanded ‘Jew or Not a Jew’?” Nappen asked. “Would that ethnicity question be acceptable?

“[I]t is offensive and not necessary,” he continued.” It has nothing whatsoever to do with one’s qualification to purchase a gun.”

As mentioned, Form 4473 is the official document that must filled out when a person purchases a firearm from an FFL. 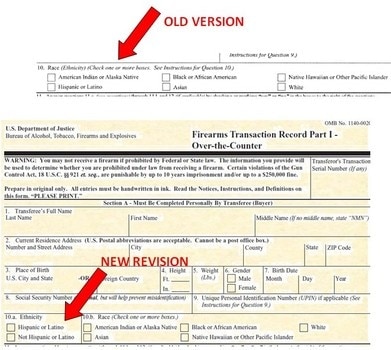 The form is not technically considered to be a registration form, but rather a sales form that contains one’s name, address, date of birth, a copy of one’s ID, the result of the NICS background check, the make/model/serial number of the firearm, and a signed affidavit that the purchaser is eligible to own the gun under federal law.

The FFL is required by law to keep the Form 4473s in a bound-book for as long as he/she remains in business.  Once the store closes down or the owner retires, he/she must surrender the records to the ATF.

The ATF is allowed to inspect an owner’s bound-book or request a copy of the Form 4473 only during the course of a criminal investigation.  Otherwise, that information is supposed to remain private – in a FFL’s possession – and away from the hands of the government, hence, the distinction between ‘sales/transaction form’ and ‘registration form.’

So, what’s the ATF’s reasoning behind the change?

Well, apparently it falls in line with a 1997 government directive from the Office of Management and Budget to standardize race and ethnicity on all federal forms.

However, Mr. Nappen, who was interviewed by Examiner.com following the publication of his initial report, called that a “lame excuse,” pointing out the OMB directive only pertained to agency action such as statistical reporting, general program administrative and grant reporting, and civil rights and other compliance reporting – none of which apply to Form 4473.

“Just because the Government has a racist approach to its agency statistics and reporting, does not mean its fine for 4473s. 4473s are not ‘gun buyer surveys.’ 4473s are not a sociological study. They are ‘confidential’ individual applications of record for a gun transfer from an FFL,” Nappen argued.

“Also please keep in mind, this is being done nine years after the end date of the OMB directive, it’s after Fast and Furious, and it’s after ‘emergency’ multi-rifle reporting requirements being imposed on border state gun shops,” he told the Examiner.

“Who is kidding who?” he challenged.

What’s your take?  Is this racism or ethnic profiling?  Or is it just the government standardizing forms?