John Richardson of the pro-firearm blog, “Only Guns and Money” put together this helpful table comparing last year’s production numbers to 2010.  The table shows both the absolute and relative changes by category in firearms production. 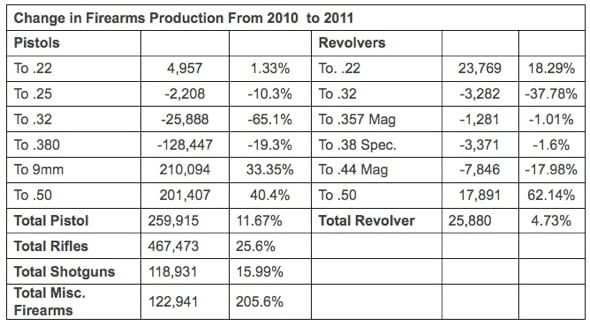 One key thing to remember is that these are production numbers and not sales figures.  So, one should exercise caution when analyzing the numbers to determine consumer trends and demands.

With that disclaimer out of the way, what was hot in 2011?  And what was not?

Well, looking at the aggregate categories: Pistols, Revolvers Rifles and Shotguns, all saw production levels rise from 2010 to 2011.  The largest bump was Rifles, with a 25.6 percent increase.  Considering that rifle production from 2009 to 2010 decreased by a dramatic 18.8 percent, the rebound in 2011 should come as no surprise.

The next biggest increase in production was Shotguns, which grew by a healthy 16 percent.  Putting the production numbers together for both rifles and shotguns shows that 2011 was a record year, replacing 2009 as the previous record holder.

As mentioned, handgun production numbers are up, pistols by 11.57 percent and revolvers by a meager 4.73 percent.  Dissecting the numbers shows a sharp decline in the production of .380 pistols, which fell by 128,477 or 19.3 percent.

One theory to explain this shift in pistol production is the growing interest in micro-nines, such as the Ruger LC9, the Kimber Solo, the Beretta Nano, and the Kahr family of small pistols.

As Richardson pointed out in his analysis, Ruger attributed new introductions such as the LC9 (and the Gunsite Scout rifle) for 29 percent of their first quarter’s sales in 2011.  It appears people are finding these new micro-nines a preferable alternative to the .380. 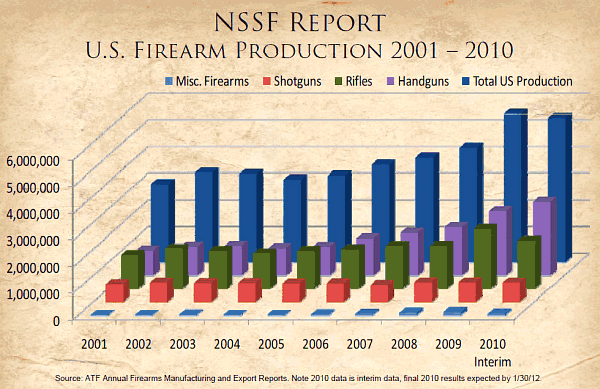 Production of larger caliber pistols, those greater than 9mm, swelled by 40 percent.  With the centennial of the 1911 last year, this makes sense.  Although, I’d have to agree with Richardson that the new “carry culture” has also played a role in the attraction to .40 S&W and .45 ACP as compelling candidates for concealed carry.

As for the revolvers, only the very big and the very small saw an increase.  And since this ATF report is the interim and not the final report, which lists each category by manufacturer, it’s difficult to get a bead on which particular models helped to boost the numbers.

That said, Richardson believes it’s due, largely, to the demand for the hefty Taurus Judge and S&W Governor.

One final category, not mentioned as of yet, is the “miscellaneous firearms.”  This category grew by more than 206 percent.  What is it exactly?  Well, it includes firearms that are not included in handgun or long gun categories (pen guns, starter guns, etc.) and firearm-related accessories like silencers.  According to the American Silencer Association, applications for the NFA tax stamp for silencers have gone through the roof, so that might explain the ramped up production in this category.

In the end, 2011 was a great year for the industry.  It’ll be interesting to see what 2012 has in store.  Will it be another record year?