Damage Industries is proud to announce their Enhanced Combat System (ECS) for AR and M4 carbines. The ECS is a polymer furniture set for AR-15 rifles.

This is a drop-in solution for people with M4-style rifles with carbine buffers and instead of manufacturing a handguard, comes with rail covers so the user can install any quad-rail handguard of his or her choosing and have perfectly color-matched panels up front. The ECS kit comes with a buttstock, A2-style grip (A1 grips are available on special order) and four textured rail guards in various lengths to accommodate accessories. 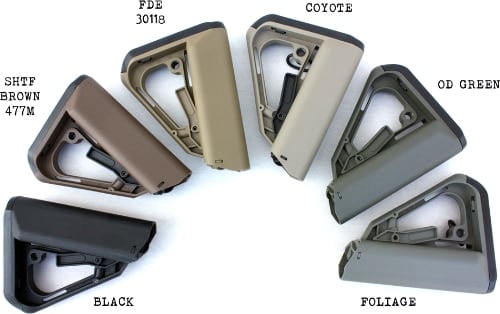 The ECS is a nice option for anyone who’s looking for something different, for people who want solid polymer furniture but aren’t interested in standard M4 furniture or other common rifle accessories, such as Magpul, which have become very common.

Another nice thing about the kit is that it’s available not in your standard three colors, but a complete tactical rainbow of foliage green, olive drab, coyote tan, flat dark earth, black and—our favorite—SHTF Brown. (Can you think of a better name for brown?) 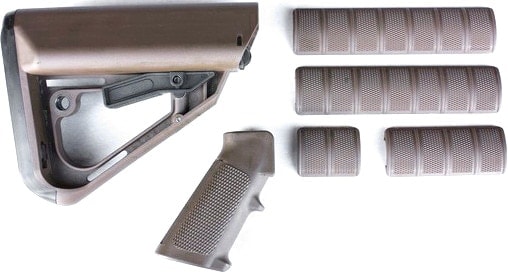 The stock features a replaceable no-slip rubber buttpad which mimics the contact surface of an A2 stock, is rounded to avoid catching on your clothes or gear, and is available for both mil-spec as well as commercial size buffer tubes. The stock also has left and right swivel stud mounts and storage compartments for batteries, cleaning tools or small parts like spare firing pins.

The ECS kit uses all mil-spec polymer and is guaranteed not to loosen when hot, and is rated for full-auto fire. 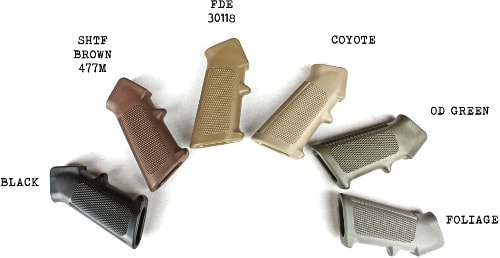 The whole ECS kit is available for $136. If you’re primarily interested in the stock and the grip, they sell separately for $90 and $5, respectively, which we think is a much better bargain than the kit, unless you’re just dying for the color-matched rail covers. Also, since the rails are for carbine-length quad rails the kit isn’t for everyone.

While black and tan might be the de-facto colors for tactical, the AR market is huge and doesn’t show any signs of slowing down it’s ongoing expansion, mostly due to the fact that people are doing a lot of non-tactical things with their rifles. If you want to set your AR apart from the crowd, a little SHTF Brown will go a long way.