Tactical Life reports that Sgt. 1st Class John Olson of the US Army Marksmanship Unit is about to make history as he prepares to compete in the 2012 London Paralympic Games.

Nine years ago, Olson was the victim of a rocket-propelled grenade attack. His fellow soldiers were able to pull him out of the wrecked humvee, but, tragically, he lost his right leg. His body may have been broken but his spirit was not: Olson was eager to complete his rehabilititation at the Walter Reed Army Medical Center in time to return to his duty station at Fort Campbell, KY to greet his deployed friends as they return home.

The loss of his leg left question marks in Olson’s future, but his shooting skill provided him with an answer. Olson did well enough in the World Cups competition to earn a spot in the US rifle competition. He’s currently slated to compete in the 50m Prone Rifle and the Mixed 10m Air Rifle. Olson was also lucky enough to be chosen to participate in the Paralympic opening ceremony, which makes him the first ever combat-injured active-duty service member to ever participate the event. 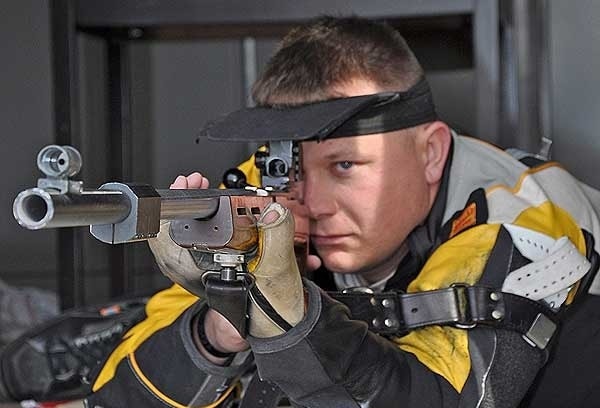 Even though the upcoming games are occupying his thoughts, this devoted sevice man is still prepared to serve his country. Olson plans to take up the role as teacher and mentor for other US soldiers who have also suffered life-changing injuries. Olson explained, “Now, instead of getting injured and being told ‘thanks for your service’ and you have to get out, the Army is affording Soldiers the opportunity to stay on active duty the same way I was. Now all of that knowledge isn’t going to be lost and we can incorporate them into our shooting program and instructor group and keep making an impact on our Army.”

Normally, we care a lot about a US Olympic athlete doing his or her best and bringing home the gold. In this case, it honestly doesn’t matter how well John Olson does in the Paralympic Games. We’re honored that such a committed and determined individual is representing America on the world stage. Any medals he earns are just icing on the cake.

For updates, stay tuned to Guns.com. For more information on the 2012 Paralympic Games, visit this website. For all breaking gun news, keep browsing Guns.com’s news feeds.