The Thompson-LaGarde Tests and the Birth of the Colt .45

In 1904 the US Army set out to determine the sidearm caliber with the most “stopping power”. The findings of that test (procured at the cost of several bovine and equine lives) helped secure the Colt .45’s legacy in American gun history and have reverberated (sometimes with an air of controversy) amongst shooters for the past century.

During the Philippine Insurrection of 1902, Philippine Moro revolutionaries seemed invincible to the US .38 Long Colt rounds fired by servicemen.  John “Blackjack” Pershing, a US general and governor in the Philippines, described the Moro warrior once as “absolutely fearless…and once committed to combat, he counts death as a mere incident.” 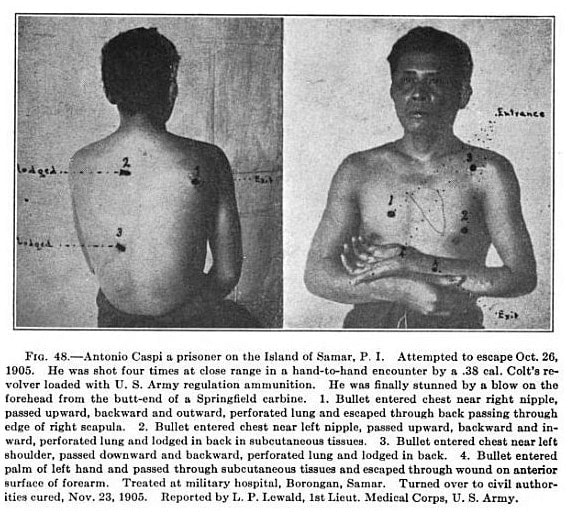 One such incident in 1905 is recounted in U.S. Army Medical Corps Col. (Major at the time) Louis Anatole LaGarde’s 1914 book Gunshot Inuries: How they are inflicted, their complications and treatment.  The account details Antonio Caspi, who attempted to escape from an American prison on the island of Samar.  Caspi “was shot four times at close range in a hand-to-hand encounter by a .38 caliber Colt’s revolver loaded with U.S. Army regulation ammunition. He was finally stunned by a blow on the forehead from the butt-end of a Springfield carbine.”

The round wasn’t just lackluster when fired from a revolver either, and shooters experienced the same problems with their service rifles. LaGarde’s book also cites an incident that Col. Winter and Capt. McAndrew, fellow members of the U.S.A. Medical Corps, had reported:

In 1907 a Moro charged the guard at Jolo, P.I. When he was within 100 yards, the entire guard opened fire on him. When he had reached within 5 yards of the firing party he stumbled and fell and while in the prone position a trumpeter killed him by shooting through the head with a .45-caliber Colt’s revolver. There were ten wounds in his body from the service rifle. Three of the wounds were located in the chest, one in the abdomen and the remainder had taken effect in the extremities. There were no bones broken.

If not a testament to the tenacity and resiliency of the Moros, these scenes nonetheless reveal the shortcomings of the .38 Colt, which compelled the U.S. Army to commission the 1904 Thompson-LaGarde Tests.

West Point graduate John T. Thompson of the U.S. Army Infantry and Colonel LaGarde were tasked with finding a pistol that compensated for the inefficiencies in the .38 revolver round. Thompson was to study the efficacy of various calibers, while LaGarde studied their medical effects and treatment. 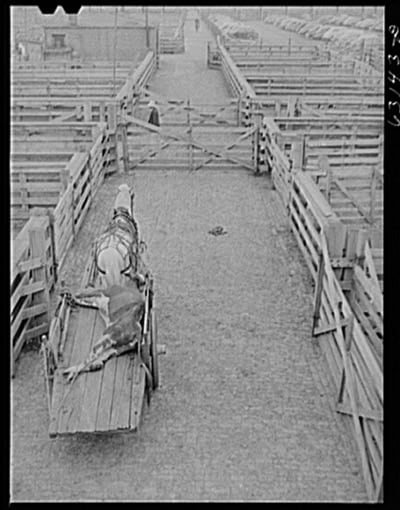 The tests were conducted at the Union Stock Yards in Chicago, using live cattle and horses (ready for slaughter), as well as human cadavers. The cadavers were dangled from the ceiling by the neck, then shot to measure the shock of each caliber, paying close attention to the amount of sway generated by each shot. The study of the cadavers accounted for the caliber of the bullet, the resistance the bullet faced upon impact, and the amount of tissue destroyed.

Those areas of the body with the most resistance, such as the long bones, yielded the greatest amount of destruction. LaGarde wrote that “resistance and destruction of tissue, which are so intimately associated with shock effects—were invariably greater when a larger caliber bullet was used,” a conclusion that rebutted claims by manufacturers that higher velocity and energy caused greater damage.

Shock effects studied on the live animals considered damage to vital and non-vital organs, as well as the effect of bullets on the legs. The results were, again, predictable. Shots to vital organs had greater stopping power, and stopping power increased with caliber when bullets were fired at non-vital organs. All of the calibers tested had a positive result when fired at the legs. Close-range tests measured the number of bullets required to send an animal to the ground.

The animals invariably dropped to the ground when shot from three to five times with the larger caliber Colt’s revolver bullets, and they failed in every instance to drop when as many as ten shots of the smaller bullets from the Colt’s automatic and Luger pistol bullets had been delivered against the lungs or abdomen. This failure on the part of the automatic pistols of small caliber set at rest at once the claims of the makers to the effect that the superior energy and velocity of their weapons was a controlling factor in stopping power. The Board was of the opinion that a bullet which will have the shock effect and stopping power at short ranges necessary for a military pistol or revolver should have a caliber of not less than .45.

Though the accuracy of the results has been hotly contested since the test’s inception, the 1904 Thompson-LaGarde Tests offer a remarkable glimpse into ballistic testing at the turn of the century. Not only did the tests reveal the varying effects of differing calibers of bullets, they also gave LaGarde a better sense of a bullet’s route through flesh and bone. He took X-rays and studied the damage to bone and tissue in order to better prepare battlefield medicine for future wars. 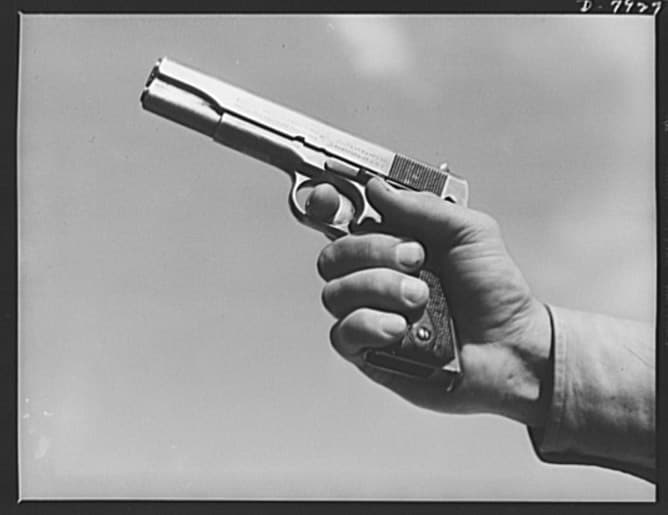 Colt had a semi-automatic .45 pistol ready to go by the time the tests were finished, and the U.S. Army ultimately settled on the John Browning-designed Colt M1911 because it was “more reliable, more enduring, more easily disassembled when there are broken parts to be replaced, and more accurate,” beating out a model designed by the Savage Arms Company.

The Army designated the Colt M1911 the standard service pistol for World War I, World War II, the Korean War, and the Vietnam War, and has been used as a non-standard weapon in the Gulf War, the War in Afghanistan and the Iraq War. It is still used today by military and law enforcement agencies around the world, including the Marine Corps Special Operations Command, Los Angeles SWAT, FBI regional SWAT teams, and Delta Force.

If the tests were performed today, they would undoubtedly draw the ire of animal rights activists, and the accuracy of the physics employed is largely debatable. Nevertheless, the tests made significant advances in surgical procedures for gunshot wounds, and both empirical evidence and simple logic strongly support what the Thompson-LaGarde Tests ultimately determined: bigger bullets leave bigger holes.