Marines May Have Selected Colt 1911 for Service

Soldier Systems has made a brief statement about the Marines putting in an order for 1911s with Colt Manufacturing. They announced their intentions to replace the aging 1911s still in service with the Marines’ Force Recon and Marine Corps Special Operations Command (MARSOC) elements earlier this year.

“A very reliable source has informed SSD that MARSOC is purchasing an initial order of 4000 Colt 1911A1 Rail Guns to outfit their troops. These will be the standard model in Desert Tan. More details as we receive them.”

Colt developed a version of their Rail Gun to satisfy the Marines’ requirements. Colt, naturally, has a long history of supplying small arms for military contracts, and it appears that their Rail Gun will be earning the MEU(SOC) (Marines Expeditionary Unit (Special Operations Command)) Pistol title. The other two 1911s in the running were the Springfield Operator and Lippard CQBP.

The Colt Rail Gun is a single-stack 1911 with a dust cover rail for accessories. It features a skeletonized hammer and trigger, and ambidextrous safety selector, an upswept beavertail grip safety, Novak sights, front and rear slide serrations and a National Match barrel.

These special units in the Marines have the option of using these 1911s instead of the more common M9 pistol, and due to the increased numbers of Marines in Force Recon and MARSOC and the age of the existing MEU(SOC) Pistols, the Marines needed to look for a new candidate for a sidearm. 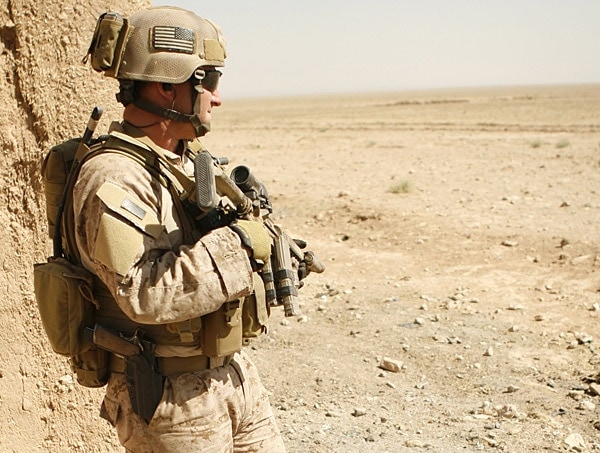 Existing 1911s in service are well over 50 years old and have hundreds of thousands of rounds through them, and they are painstakingly—and at significant cost—rebuilt every 10,000 rounds. They don’t have Picatinny rails and require adapters for standard pistol accessories like lights.

The Marines issued their request for submissions from manufacturers in 2010. Their requirements were for modern 1911s that would have better features and cost less to maintain. They were looking for “off the shelf” 1911s. While the Colt MEU(SOC) option is specially-made for the Marines, it is functionally no different than their standard Rail Gun with a desert tan Cerakote finish and synthetic grips.