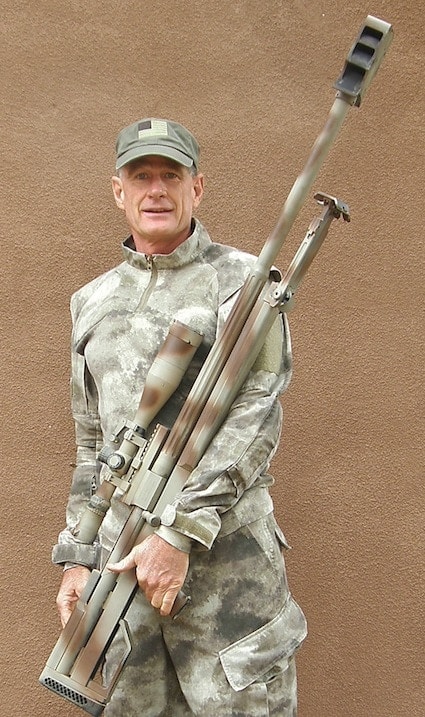 When most people look at Wilkinson’s massive Steyr HS.50 long-range precision rifle, they think, “Holy crap! That thing’s huge!” In the world of .50-caliber marksmanship, however, Wilkinson’s gun is comparatively dinky.

This rifle really isn’t that much different from a fresh, out-of-the-box Steyr HS.50. Sure, he equipped it with a Nightforce NXS 5.5X-22X 56mm scope and gave it a custom paintjob, but past that it’s bare bones. To put things into perspective, his rifle weighed in at a mere 30 lbs., which is well short of the 50-lb limit.

Wilkinson trumped his 31 competitors, many of whom were packing much more accessorized and customized rifles. His final score was 274-6X, just two X’s higher than the second-place competitor.

This is the second year in a row that a simple Steyr HS.50 has won the Hunter Class; Eduard Abril de Fontcuberta took the award last year. The Steyr also has a three-year streak helping shooters secure first place at the 600-Yard Practical Match win at the World Championships.

Wilkinson explained that it took a while for him to fully grasp how great the rifle was, because it was performing better than he had ever could have imagined. He said, “As I was working up a load for the HS.50, I shot groups that amazed me. They were the best groups that I have ever shot in my life—and they were with the .50 BMG!” He added, “I didn’t expect that kind of accuracy … I didn’t know what to think.”

We’ve learned two things from this. First, William Wilkinson is an amazing shooter. Second, we’re going to have to add a Steyr HS.50 to the top of our shopping list.