New Scientist reports that British researchers have developed a technique that can link gun owners to crimes through pollen.

Paul Sermon, a nanomaterials engineer at Brunel University in London, has been working on this technique for years. At long last, he’s finally landed on a perfect mixture that can be applied to ammunition. Sermon described the process: “It’s as simple as dunking a biscuit in a cup of tea.” Spoken like a true Brit!

So, how does it work? Basically, scientists can create a special mixture, and then coat bullets in the mixture. Anybody who touches these bullets will get invisible residue on their hands. After a bullet’s been fired, police can determine the exact chemical fingerprint of the bullet’s coating and then swab the hands of suspects to see if they’ve got a match.

The pollen acts as a kind of fingerprint. They can create custom mixtures using different strains of pollens to be able to differentiate between different bullets. Think of it like this: every time you load a bullet, you get an invisible stamp on your hand. The chemical mixture provides the invisible ink, and the pollen provides the serial number that gets stamped into your skin. 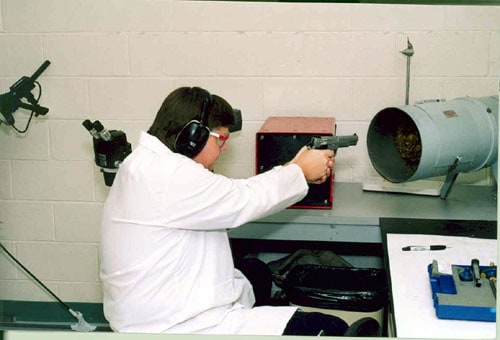 Does that make anybody else uneasy? Listen, we at Guns.com are about as pro-crime-solving as you can get. We’re all about solving cases and putting criminals behind bars. But doing that by putting invisible tracers on the hands of gun owners, without their knowledge? That’s going to tick a few people off. On top of that, it doesn’t exactly get investigators that much closer to solving a crime. The most they could prove is that a person handled the bullets. It doesn’t prove that that the individual also pulled the trigger.

This technology is still under development, but if it ever catches on gun owners might find that giving their ammunition a bleach bath becomes part of the reloading routine.