Four Shotguns You Need to Shoot Before You Die

The shotgun. Perhaps the greatest gun—a long arm you don’t have to aim that virtually anyone can become proficient with within minutes. There are so many different varieties, options, and purposes for which a good shotgun can be used, everything from hunting rabbits and squirrels to breaching doors and personal defense, that it is no small wonder the gun market has always offered a torrent of scatterguns choices to shooters, despite the fact that ultimately, there are only a handful of basic shotgun designs for civilians.  And to this gun writer, it’s these shotguns that you should make a point to get acquainted with before your roll is called up yonder.

Few shotguns are as iconic as the Winchester 1897 shotgun. The 1897 was a revision of the John Browning 1893 shotgun and was chambered in either 12 or 16 gauge and was instantly identifiable by its exposed hammer. More than a million were produced.

The Model 1897 found favor among hunters but also among law enforcement and then the military, seeing action in World War I.  This gun was absolutely feared by the Germans when the fighting got tighter for one reason. The 1897 lacked a trigger disconnector, which gave the shooter the ability to slam fire the gun.  In combat, this meant that putting a barrage of 00 buckshot downrange was a cinch.

The remarkable thing is that the Winchester 1897, even today after having been discontinued over 50 years ago in 1957, is still in demand not just as a collector’s item, but also for personal defense, hunting and especially for Cowboy Action Shooting.

The Browning Auto-5 was the first successful semi-auto shotgun ever produced and like the 1897 Winchester was also a John Browning design. Initially, Browning showed his design to Winchester which they refused, so Browning went over seas to Fabrique Nationale who began production on the gun in 1902.  It was later licensed to Remington as their Model 11 and then to Savage as the Savage 720 and 745.

First time Auto-5 shooters often describe firing the gun as a new experience because the barrel and the action recoil together. The Auto-5 uses friction rings to control the recoil. You set the rings according to the loads you are using, which takes a little getting used to at first. The Auto-5 was chambered in 12, 16, and 20 gauge and was in production first in Belgium and later in Japan for nearly one hundred years until it was discontinued in 1998.

Most people think of the single shot shotgun as something for beginners, but at one time they were used right along side pump and semi-auto guns, and perhaps the finest made was the Winchester Model 37.

Introduced in 1936 the single barrel was chambered in 12, 16, 20, 28 gauge and .410. The small exposed hammer earned the name pigtail and the earliest versions were known as “Red Letter” guns because of the Winchester name on the underside in red enamel. The little single shot swings and points almost naturally making it phenomenal on game. During World War II National Guard soldiers were even issued Model 37’s in 12 gauge. When it was discontinued in 1963 after over one million Model 37’s had been produced. 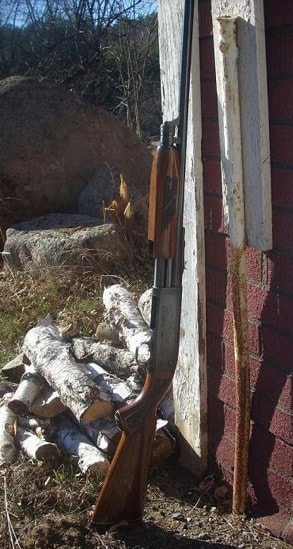 The Ithaca Model 37 is perhaps the most successful pump action shotgun in history, evidenced by how many occasions it has been resurrected by manufacturers but in truth, the gun, also known as the Featherlight and then later as a rifle sighted version known as the Deerslayer, was actually a revamping of the Remington Model 17.

The Ithaca 37 was a perfect gun for both left and right handed shooters as the shells loaded and ejected from underneath. Hunters fell in love with the Ithaca 37, which was offered in 12, 16, 20 gauges for many years and sometime later 28 gauge. Like many other shotguns the Ithaca 37 served in both the military and was seen in more squad cars than any other shotgun for decades. It simply worked and still does to this day.

On more than one occasion the Ithaca 37 has been declared dead (especially when the company folded) but continually resurfaced with a new breed of Model 37’s still being produced to this day.

The shotguns listed above have been some of the best seen over the last century, have all stood the test of time and most importantly, when taken as group, tell a fairly complete story about American shotgun design. If you go into a gun shop you are bound to find at least one if not all of these four on a rack and it is not likely they will be sitting there long, snatched up by a savvy collector, hunter, or home defender who knows these tried and true favorites offer piece of mind over newer models.