Quickly changing magazines with AK rifles is hard enough even if you know what you’re doing, especially if you’re under stress. They’re not forgiving when it comes to accepting magazines that are angled in and not aligned properly. Practice helps, but this magwell helps more. 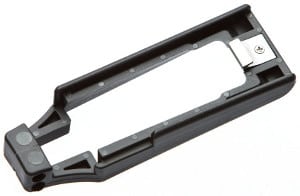 The problem is that the bottom of the receiver is flat. The MFER takes care of that, and provides ramps to guide in fresh magazines.

It’s a simple polymer magwell that clips to the inner lip of the magazine cutout and screws down around the magazine release. It doesn’t interfere with the magazine release, either. The clip is small and stainless steel, and the magwell does not obstruct the cutout. The guys over at Military Times’ Gear Scout tried one out and came away impressed.

“First, its affordable at $37… Second, [an] idiot could install this thing, its as simple as pushing the lip into place, then spreading the rear around the trigger guard and attaching the screws.  Third, it flat out works.  The funnel isn’t a gaping sinkhole, but it is large enough that it makes a substantial difference in getting that mag into place.”

The MFER is designed to work with 7.62x39mm magazines, and we suspect that with a little filing the clip could be made to work with AK-style rifles in all calibers. It will not work with Yugoslavian AKs. 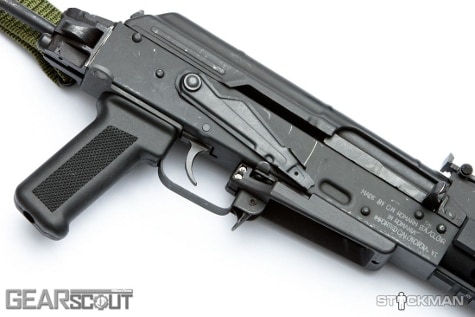 These days it’s possible to spend as much on an AK as you can an AR, and the aftermarket for AKs is almost as big. It’s nice to see a simple and effective tweak that’s priced more in-line with the AK’s spirit. And it doesn’t look out of place, either. Of course, that could be the wallpaper-quality photos they took for their review.

We like the MFER, it’s an easy gun mod that adds a lot of functionality, in the field, at the range or even competition. What’s you’re favorite AK accessory?