Bonnie and Clyde's Guns (up for auction) in Profile

Just over 78 years after their epic final stand near Gibsland, Louisiana, Bonnie and Clyde are once again in the news. Four firearms from their notorious arsenal, all handguns, are up for sale. The pieces are bona fide American law enforcement and firearms history, as well powerful pop culture materialized, so we thought we’d take a closer look.

Who were Bonnie and Clyde? 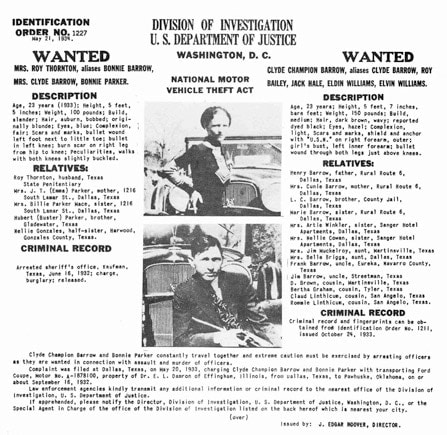 Bonnie Elizabeth Parker and Clyde Chestnut Barrow were the leaders of a criminal gang of outlaws that roamed around the Central and Southern US during the Great Depression. Their gang, numbering at times as many as a half dozen followers or as few as just the couple themselves, committed numerous armed robberies and thefts in their three-year rampage.

Among their dark deeds were the murders of no less than nine law enforcement officers in bloody shootouts. Along with the likes of such scoundrels as Machine Gun Kelly and John Dillinger, the Barrow Gang captured the imagination of generations and is now as infamous as any of the outlaws of the Wild West era that preceded it.

Their career was ended by a one-sided ambush in which six Texas and Louisana law enforcement officers (including legendary lawmen Ted Hinton and Frank Hamer) fired no less than 130 rounds into Bonnie and Clyde’s Ford V8 at point blank range. On their last day on earth in 1934, Clyde was age 25, and Bonnie was just 23. Among the lawmen’s arsenal were Remington Model 8 semiautomatic rifles and Colt Monitor (itself a civilian marketed BAR) light machineguns. The local undertaker stated publicly that it was very hard to embalm the criminal’s bodies, as they would not hold fluid. 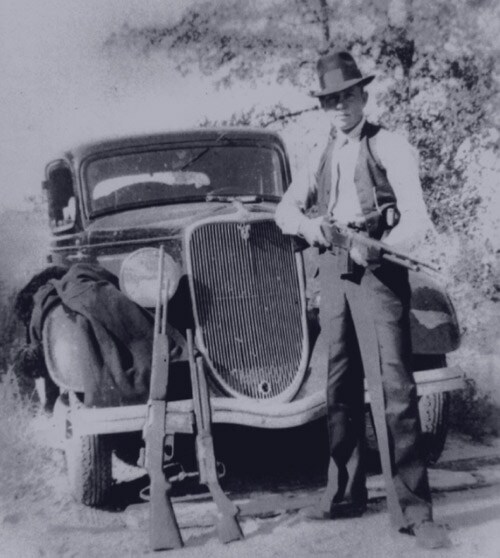 The Barrow gang was one of the best-equipped organizations (criminal or otherwise) of their time, as far as firearms and vehicles are concerned.  Barrow, although he had never been in the military, had a love of US Army weaponry including the BAR 30-06 rifle and the Colt 1911 pistol. Both, often stolen from government arsenals, played prominently in many of his shootouts. While the NFA was not in place at the time and civilians could purchase fully automatic weapons over the counter, this underlines the point, if firearms are outlawed, than only outlaws will have firearms.

Civilian weapons favored by the gang included specialized and modified .38 revolvers, sawn off shotguns, and other standard firearms of the day, though often tinkered with in some way to improve function. Their modified scatterguns counted many Remington Model 11’s and were referred to as “Whippet” guns.  These compare nicely to the best AOW pieces of today (meaning “any other weapon” and a reference to the Nation Firearms Act designation).  A modern day equivalent to the Barrow gang would be a group of bank robbers who used Benelli scatterguns, FN SCARs, and IPSC modified custom 1911s as they tore across the country in a Mustang Shelby.

The guns up for auction

Four of the Barrow gang’s firearms are coming up for public sale by the RR Auction House of Amherst, New Hampshire. These firearms passed through the hands of numerous law enforcement officers to museums and private collectors over the past seven decades and have surfaced once more. The first is a Colt US Army New Model 1909 six shot revolver. With the standard four-inch barrel, wooden grips, and lanyard ring, the .45ACP caliber hog leg is much the same as it was when taken from Clyde’s body following the 1934 shootout. 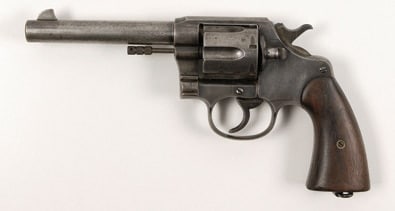 The second firearm is a 2-inch barreled Colt Detective snub-nosed .38 Special that was recovered from Bonnie Parker on the same day. The so-called “Squat Gun” was found on her thigh where it was taped to her using white medical tape. Frank Hamer, the legendary Texas Ranger whose team ended the gang’s rampage, personally, found the weapon and removed it. 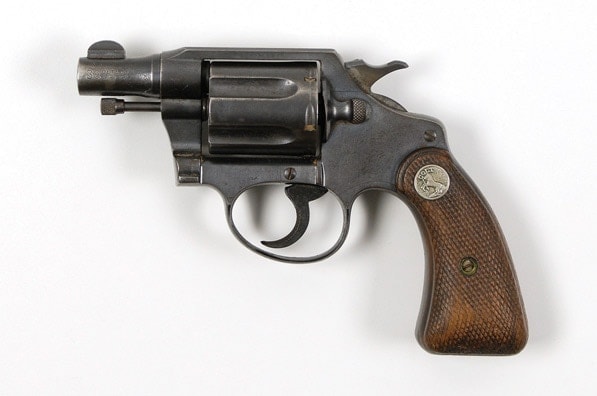 The third is Clyde’s waistband gun, a now-classic Colt 1911 Government model complete with double diamond grips. Believed to have been stolen from a National Guard Armory in Beaumont Texas, the US Property markings have been scratched out. Like the Squat Gun and the Colt 1909 above, Frank Hamer recovered the 1911 in 1934 after Bonnie and Clyde’s final shootout. 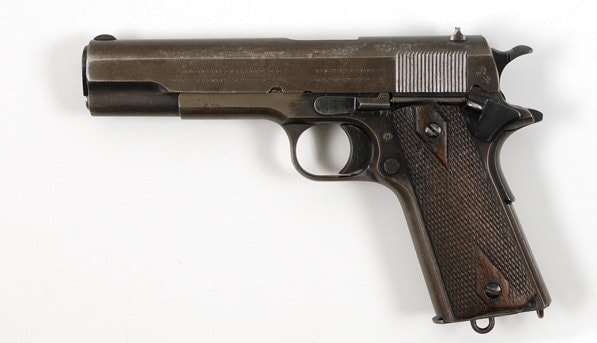 The fourth and final Barrow gang gun coming up for auction is a .38 Special caliber Colt New Army FitzGerald Special. The FitzGerald Colt was one of the top combat concealed guns of the day, having a 2″ barrel, molded grips, a bobbed hammer, and snipped trigger guard. Unlike the other firearms coming up for auction, it was recovered by lawmen in 1930 in one of the gang’s stolen cars. Clyde surely missed such a nice piece. 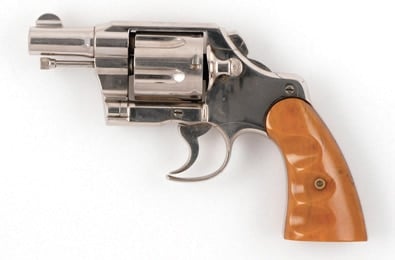 The auction is set for September 30 and bidding is expected to be ‘brisk’ with the two particular weapons recovered directly from the bodies of the outlaws expected to go for over $100,000 apiece.