It's Official: Details Emerge About Marine Selection of Colt 1911 for Spec Ops Duty

It’s official, the United States Marine Corps Special Operations Command (MARSOC) pistol contract has been won by Colt Manufacturing, LLC. We heard a rumor about this earlier this week, and the rumor was right. Now with a proper announcement, we can cover this story in detail.

“Colt Defense LLC, West Hartford, Conn., was awarded a $22,500,000 indefinite-delivery/indefinite-quantity (IDIQ) contract July 18, 2012 for production, delivery and logistical support of the Close Quarter Battle Pistol. Work will be performed in West Hartford, Conn., and is expected to be completed by July 2017. No contract funds will expire by the end of the current fiscal year. This contract was competitively procured using full and open competition with three offers received. The Marine Corps System Command, Quantico, Va., is the contracting activity.”

The Marines will start with an order of 4,000 pistols and may in the future order as many as 12,000 of the Colt 1911s. We can’t say if this includes a maintenance contract, but that means the individual price for the guns is $1,875. The new 1911s will receive the designation M45 Close Quarters Battle Pistol (CQBP).

In the end, the competition was between Colt and Springfield, with Colt offering a modified Colt Rail Gun and Springfield’s Marine Corps Operator. The existing 1911s in service are decades old and are rebuilt every 10,000 rounds in Quantico, Va., by hand at no small cost. Because of this the Marines started this competition to find a successor to the Marine Expeditionary Unit (Special Oerations Capable) (MEU(SOC)) Pistol. 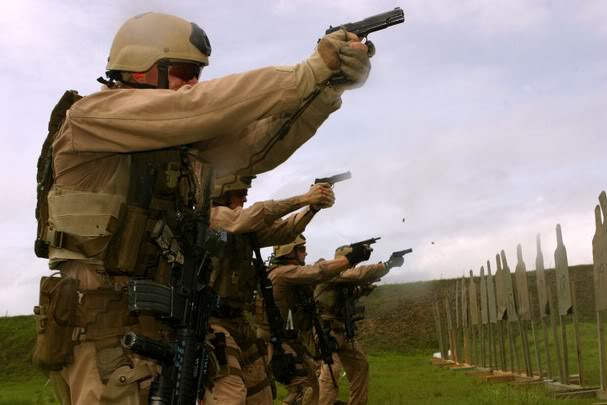 Colt modified their Rail Gun significantly for this contract. They replaced the traditional recoil spring and guide rod for a dual recoil spring assembly to reduce recoil and improve shot times and the gun uses stainless steel internals for better wear resistance in the many harsh environments faces by the special operations Marines, particularly salty water.

The M45s also feature Novak tritium-powered night sights, a series-80 firing pin safety, a desert tan Cerakote finish and synthetic grips. Unlike the MEU(SOC) Pistol, it does have a rail. It is a full-size single-stack 1911 chambered in .45 ACP.

Colt recently lost their exclusive contract for the Army’s M4, so this is a nice catch for them, and if they make the M45 available for civilian sale, we suspect they’ll sell more than a few.