In 1973, Evelyn Martinez was shot in the head by her ex-boyfriend.  The Harlem woman was waking down the street with her brother, Richard Rivera, when her former lover, Jose Morales, opened fire on the siblings.

Morales killed Rivera, but Martinez survived the shooting.  Following the incident, Martinez underwent extensive rehabilitation to regain brain function and largely succeeded, although the left side of her face was permanently paralyzed and she would continue to suffer from seizures.

But, the important thing was she survived.  She would go on to live a productive and fun-filled life, all things considered.

“She would still go dancing even though she couldn’t fully use her left side,” said her son, Jose Morales, 40, told the Daily News. “She refused to stay down.”

On Jan. 9, 2012 – decades after she’d been shot – Martinez collapsed on the floor of her upper Manhattan apartment.  She was dead.
This week, upon reviewing the evidence, the city’s medical examiner concluded that Martinez’s death was a homicide.

What was the cause of death? 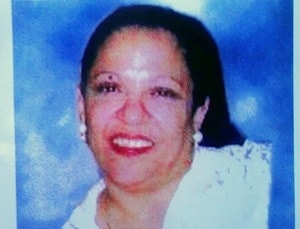 A fatal seizure induced by the gunshot wound she suffered from 39 years ago.

To put it another way, she was an undead homicide victim for almost four decades.

As for the shooter, well, investigators don’t need to worry about him.  Shortly after he ambushed Martinez and her brother, Morales turned the gun on himself – good riddance!

Meanwhile, Martinez’s family members take solace in the extraordinarily resilient person she was.

“She was the best mother in the world, she was a remarkable woman,” her daughter, Lorraine Martinez, 44, told the Daily News. “I remember her, but mostly I remember her smile.”

Putting the family’s tragedy aside for a moment, this case raises an interesting scenario.  That is, had Morales not committed suicide, but instead went to prison for 30 to 35 years and then been released on parole, he would have been indicted on another murder charge.

Presumably, during his first trial, Morales would have been charged with murder (for Rivera) and attempted murder (Martinez).  Since double jeopardy doesn’t kick in with respect to Martinez and there’s no statute of limitations on murder, Morales would have, in all probability, ended up back in prison.