The decision to disarm patrolmen follows an incident earlier this month in which American military police officers handcuffed three South Koreans in a dispute over an illegally parked car outside the Osan Air Base.

While the situation was resolved peacefully, it drew the ire of South Korean civic groups who argued that U.S. troops have no right to handcuff and detain Korean citizens, thus compelling U.S. officials to issue a formal apology. 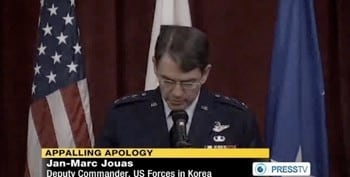 “I am very sorry this occurred,” said Gen. James D. Thurman, commander of the 28,500 American service members in South Korea, in a July 8 press conference.  “I want to express my sincere apology to the individuals and community affected by the incident.”

To be perfectly clear, no one was injured in the incident and no charges were filed against the Korean citizens (to read more on the details of the incident, click here).

Nevertheless, officials implemented the gun ban for town patrol units at all USFK installations over the weekend, according to USFK spokeswoman Jennifer Buschick, who added in her comments to Stars and Stripes that U.S. security forces and military police routinely patrol entertainment districts frequented by troops, usually at night.

The off-base patrols will continue, but the military has “determined that it is pertinent to make an immediate adjustment to off-base community patrols,” a USFK statement said. “We are continuing to review our procedures and evaluate the need for adjustments related to community patrols outside of our USFK installations … we continue to work closely with and cooperate with the community, business leaders and Korean National Police in the ongoing investigation.”

The decision to disarm off-base patrol units was welcomed by a Pyeongtaek police official, who spoke on the condition of anonymity.

“People are sensitive about this because carrying guns isn’t allowed in our country” with the exception of the police or military, he told Stripes.com

A spokesperson with the Ministry of Foreign Affairs and Trade also applauded the move, saying that South Korea even requested the gun ban for town patrols. 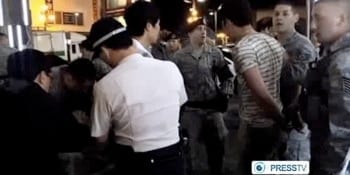 “Basically, it is at odds with our people’s sentiment,” the spokesperson said. “There’s a risk of accidents as well.”

When probed if the ban puts American lives at risk, the USFK spokesperson said patrols have access to direct responders if needed.

“For instance, our military patrols have contact back to the U.S. military installation and Korean law enforcement authorities when they cannot reasonably respond to a situation or if there is an emergency,” a USFK-issued statement said.

(Of course, the obvious rebuttal: what happens when seconds count and backup is minutes away?)

For video of the apology and the incident, click here.

What are your thoughts?  Is the gun ban a knee-jerk reaction by U.S. officials?  Or is the apology and subsequent gun ban the right thing to do given the outrage and rancor the handcuff incident has generated?