The cartridge wars will never abate, but for a time now, it seems to have taken a turn towards calm, in no small part, thanks to 300 AAC Blackout. Based on the standard .223 Remington case necked out to accommodate a standard .308 bullets, the new intermediate cartridge brings 30-caliber bullets to the AR-15 rifles we have widely adopted across the country.

And 300 AAC Blackout is especially popular with the silencer crowd, people who recognize the need for a heavy 220-grain subsonic bullet in a suppressed compact carbine package. So it stands to reason that Russian arms researchers would follow suit, taking their standard x39mm and loading it with a heavy 260-grain 9mm bullet… back in the 1980s.

Yeah, the Russians have been doing this for twenty-five years now. Guess what: it works great. The 9x39mm cartridge was developed in the ’80s for use with the VSS “Vintorez” (Threadcutter) Special Sniper Rifle. While on its face an AK-style rifle, it appears that it has more in common with the SVD, with its recessed fire control group housing and magazine release. The VSS was developed for Spetsnaz and other special forces who wanted a dead-silent sniper rifle with an effective range of about 300 meters.

The VSS met that criteria with a very precision-made rifle with micro-ports inside the grooves of the rifling that vented into an suppressor integrated into the barrel. Entering into service in 1987, the Vintorez earned early marks for its knock-down power, although it wasn’t the most accurate of sniper rifles.

Soon after it was replaced by the AS “Val” (Shaft) Special Automatic Rifle, which replaced the wood stock and grip for synthetic grip and a side-folding steel stock. The other specifications remained the same, it was just a modernization of the rifle that slightly preceded the introduction of the AK-74M, which was the AK-74 with the polymer treatment.

Then in the ’90s the SR-3 “Vikhr” (Whirlwind) was introduced. The SR-3 drops the integrally-suppressed barrel and uses an optional quick-detach silencer. The barrel is shortened to about Drako length and it comes with a side-folding wire stock. These aren’t sniper rifles, they’re for close-quarters combat and are easily concealed for security; Vikhr is Russian for Honey Badger. 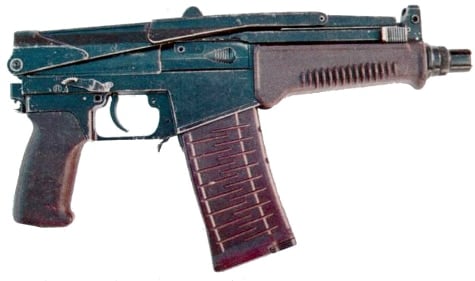 The SR-3 M is very slick variant with a small thumb safety and no charging handle. Instead, the bolt carrier has serrations for the operator to engage with directly, and the barrel extension has been redesigned without a suppressor mount. If this isn’t a trenchcoat gun we’ll eat our keyboards.

And new for this year, Russia is introducing the SR-3 Vikhr MP. More closely-related to the no-M SR-3, the MP has a redesigned handguard and folding foregrip and Picatinny rail sections for lights and other tactical accessories. The iron sights have been moved to the handguard and the dust cover modified with a full-length Picatinny rail for optics.

But what stands out the most is a side-folding handguard projecting from the base of the pistol grip. In all likelihood this is for police issue and the stock is designed to clear full-face shields, and instead of pocketing the buttstock in your shoulder, you put it onto your chest.

It’s not likely that Russia is going to export these for general sale. The newest Vikhr and the other 9x39mm assault and sniper rifles are for operators operating operationally, but that doesn’t make them any less interesting. And frankly, we’ll be happy just getting our hands on some of the updated Saiga 12 shotguns.