Trapper 'Set-guns': The Taylor Fur Getter and Sure Shot

Share
In 1914, a specially designed pair of set-guns was sold in the United States. Their ingenious design was deadly simple and efficient, however it soon fell out of use, and their production was finally discontinued when it was effectively banned along with most commercial trapping in the 1930s. Known as the Taylor Fur Getter and the Taylor Sure Shot, these exotic little contraptions are now a hot item with collectors.

The concept of the ‘Set-Gun’ 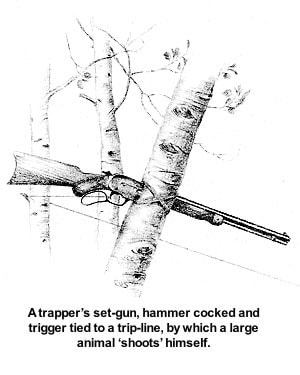 Hunters have long used “set-guns,” or “trap-guns” which are firearms left primed and ready and triggered by a trip wire of some sort, to take game. These date back to as late as the 17th century and were often old discarded, obsolete, or broken pieces repurposed for less precision puruits.

In the golden age of fur trapping after the 1800s, the demand for these purpose built weapons to take large quantities of fur bearing animals was clear and pressing. With the mass production methods of the Henry Ford era capturing the imaginations of many ambitious Americans and the cheap availability of metal presses and metalworkers, the early 20th century represents the pinnacle of set gun development. Several companies made set guns during this period including the Getsem Gun Company of Lincoln, Nebraska, F. Ruthe of Hartford, Connecticut, and the FC Taylor Fur Company.

The design of the Taylor Fur Getter

In 1916, the company merged with the Funsten Bros Company and amalgamated as the International Fur Exchange, operating from a huge 7-story building in downtown St. Louis.  The FC Taylor Fur Company is still around in one form or another, with its current mailing address in in Ohio as part of the now Sterling Fur and Tool Company. 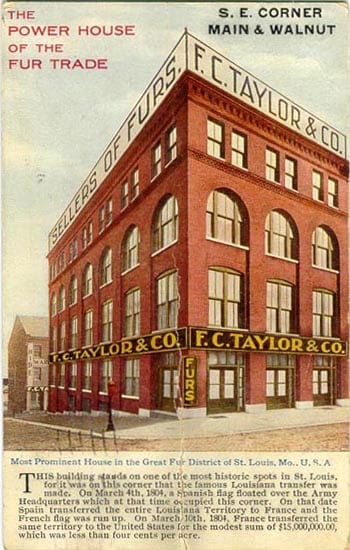 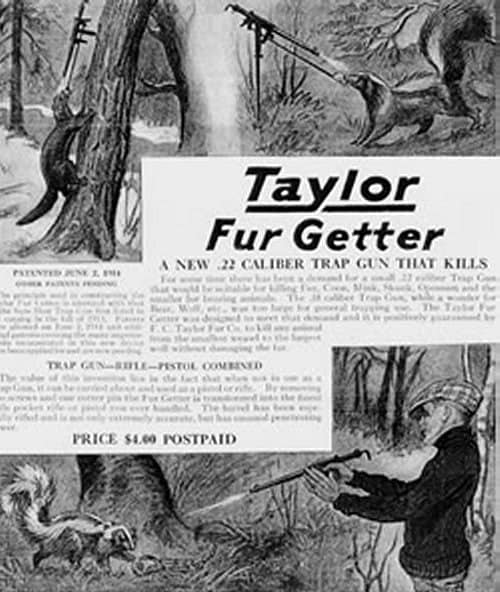 An inventor by the name of Charles D. Lovelace designed a set-gun device in 1912 and sold a few under his own company, The Texas Firearms Company, before Taylor picked it up. They patented it (US Patent number #1,098,742) in June 1914 as their “Fur Getter” set gun for sale to its suppliers.

The operational concept was simple: steak the firearm into the ground, adjust the elevation for the height of the target animal (e.g. low for mink or high for coyote), rig a nice juicy piece of bait on the 11.5-inch trigger hook that extended directly in front of the muzzle, load it, cock it by pulling the striker back, remove the cotter pin safety device, and walk away. Check it daily or whenever you heard a gunshot, and reset as needed.

Clean, methodical, and reliable with almost a guarantee of quick harvesting of an animal with a small caliber head shot, which preserved the pelt. The wood screw of the mounting steak allowed the device to be placed vertical on the trunk of a tree to target raccoons, or along crawlways and hen house exits for foxes, etc.

The barrel was removed by turning the handle of the retaining pin for loading and unloading. Its small .22 caliber 6-inch barrel was rifled even though every shot made with it would most likely be at point blank range. In a pinch, they could be held and fired by hand at targets of very short range, if the operator was very careful. The little .22 was made under contract for Taylor by OF Mossberg. 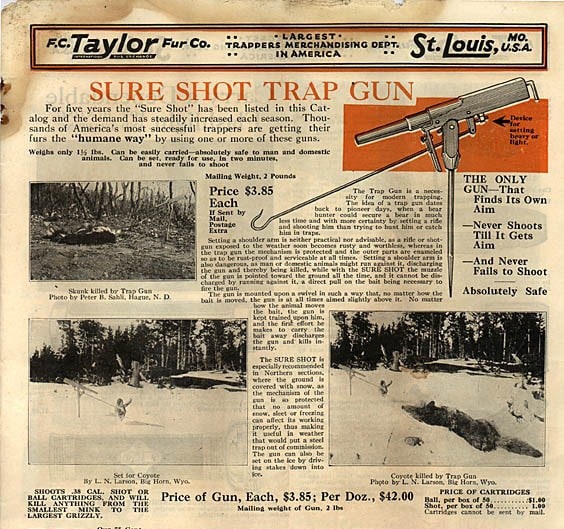 Taylor also offered a larger version, the “Sure Shot” that fired a .38 caliber round from a smoothbore barrel, and was meant for wolf and bear-sized game. It was a little beefier than the Fur Getter at a weight of 24-ounces and was made for the Taylor under contract by Hopkins and Allen. The company sold specially made shot or ball rounds for the device in boxes of 50 for $1.

They continued selling both the Sure Shot and the Fur Getter as late as the 1930s in catalogs for $3-$4. It would appear that under the terms of the Federal Firearms Act of 1934, the devices were made illegal. Since they had no stock or grip they were the same concept as a sawn off shotgun, and thus classified as a big legal no-no.

While final production numbers for either the Taylor Fur Getter or the Sure Shot cannot be verified, a decent number survive due to their sturdy and simple construction and extensive use of rust-resistant brass materials. Functional examples typically sell for $1500-1900 and even non-working specimens that are still otherwise complete often bring as much as $800-1000 from collectors.

Current BATFE rules that because of the date of their manufacture, value, design and other characteristics, the following firearms are primarily collector’s items and are not likely to be used as weapons and, therefore, are excluded from the provisions of the National Firearms Act, listing them as curios and relics. That keeps the Fur Getter and its larger cousin the Sure Shot from continuing to fall under the short-barreled weapon criteria and dangerous device auspices of the Federal Firearms Act of 1934.

Even while their collector status is affirmed by the federal government, most state wildlife and conservation agencies would frown on you putting your vintage Taylor set guns back into use.