Whether L stands for Large or Long, this handgun has been a long time coming. Based on the Steyr M-A1 pistol, the L-A1 extends the length of the slide and frame to make a full-size handgun. 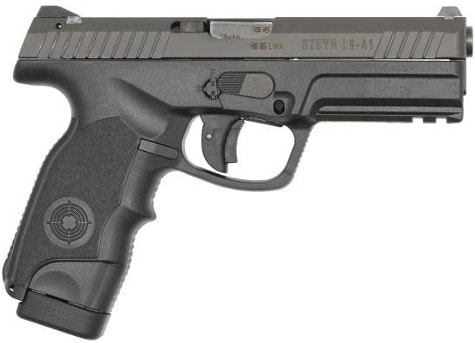 The technical details are still a bit blurry, but it appears as though little changes between the M-A1 and the L-A1, just the barrel length and respective parts of the slide and frame. Steyr has a page on their website for the L-A1 but it lists the barrel length at 4 inches, which is the same as the M-A1 and obviously not the case judging by the photos. We’re guessing, but it looks about half an inch longer.

The L-A1 will be manufactured with and without manual safeties, but we only expect the model without any manual safeties to be imported to the U.S., just like the other Steyr pistols. The L-A1 maintains the features of Steyr’s other pistols, including the trigger, firing pin and drop safeties, loaded chamber indicator, and integrated lock (that works with either the supplied key or a handcuff key) and adds front cocking serrations for press-checking. 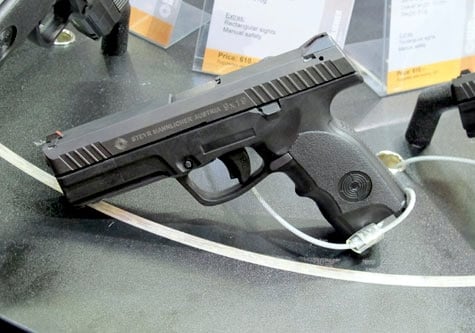 Shotgun News managed to find a photo of one in the wild, and rumor has it that they will become available for sale in Europe and the U.S. by the end of this year. The price hasn’t been announced but we expect it to be on par with the other M-series pistols, or between $450 and $550.

Steyr Mannlicher may be best known for their instantly-recognizable AUG rifle, but their handguns have a devoted following, and the M-series of Steyr pistols is more than just the other Austrian handgun, at least to those who know. While it does share the aggressive grip angle of the Glock pistol (actually it’s slightly more aggressive) it is a different kind of shooter all-around, and has developed a reputation as a durable, reliable and accurate service pistol. We expect the full-size to feel right at home on a belt, at a competition or on a nightstand.

Steyr has a small but dedicated and passionate collective of fans here in the U.S. If you’re interested in seeing what all the fuss is about, when the new Steyr L-A1 hits the streets, maybe it’ll be time for you to find out.