The Bug-A-Salt, “The original salt gun,” is not an ordinary means to deal with pest insects and other irritating invertebrates. It combines the comfort of a bug-free environment with the satisfaction of shooting. Loaded with table salt, the Bug-A-Salt is an easy and safe way to off bugs.

It’s a simple spring-loaded salt shooter with an effective range of 3-5 feet. This kills or at least stuns pests without splatter for easy cleaning. The internal salt reservoir holds enough for about 50 shots.

Being a ranged bug killer, the Bug-A-Salt makes taking care of pests that would normally be out of reach much easier. And the fact that it uses salt as a projectile make it much safer and cleaner than insecticides and other bug-control measures.

The Bug-A-Salt’s current list price is $30, and you can pre-order one on Indiegogo, a capital-building project-launching website similar to Kickstarter, of the Andromeda Tactical Lamp fame.  Invented by Santa Monica artist Lorenzo Maggiore, the Indiegogo project has already met it’s minimum goal of $15,000 and exceeded it greatly, having raised well over $70,000 for these salt-spraying machines. 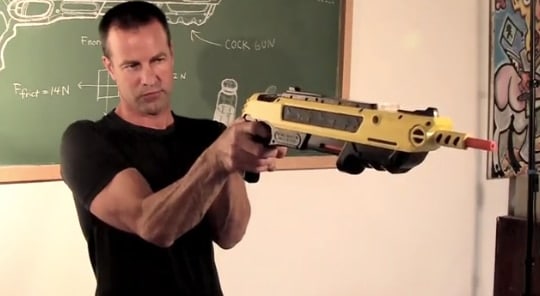 There are still many days left for you to pre-order a Bug-A-Salt if you want one. It’s non-toxic, uses no batteries, is safe around kids and pets (although not on kids and pets) and cheap to operate.

Plus, it has a nostalgia about it that we can’t quite put our finger on. We half expect to see ads for this on extremely late-night television, before they shut off the transmitters, back when transmitters got shut off at night. At least the color scheme is right, focusing on the orangest of oranges, the yellowest of yellows, and the most tactical of greys to fit in with many decades of strange plastic toys.

Of course, this is not a toy. Don’t shoot it at people, and certainly don’t load it with pepper and shoot your siblings in the face with it. Not even if you have to take time off work and fly out to Springfield just for the chance to do so. Because you’re a responsible adult now, and adults don’t do that sort of thing.