Yahoo News reports that family members of Manuel Diaz, a man who was shot by police in California this past weekend, are filing a civil lawsuit against the city of Anaheim. This lawsuit and the investigation surrounding the shooting are the culmination of a four-day protest against police brutality.

It all started with Anaheim police officers approached three men in an alley who were allegedly exhibiting suspicious behavior. The men fled the scene and police pursued. Details are still sketchy about what led up to the shooting, but what is known is that one of the men, Manuel Diaz, was shot in the leg and the back of the head.

To make matters worse, there was another fatal police shooting that same weekend. Neither man had been changed with a crime. 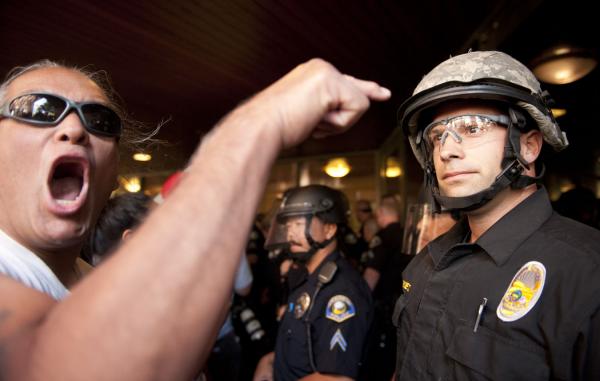 Angry citizens marched through the streets as part of a four-day protest against the police shootings. Some of the protests grew violent when protestors set fire to a trash can, smashed the windows of a Starbucks, and threw rocks and bottles at police. The police responded by shooting bean bag rounds and pepper balls at the crowd, and arresting 24 people.

The police aren’t exactly handling the situation delicately. The protests were against police violence, and the police have responded with even more violence. A recent video shows police firing rubber bullets into a crowd containing women and children, and one officer released a K-9 that charged at a mother holding her baby.

Mayor Tom Tait attempted to soothe the protesters by agreeing to have officials review the two deadly shootings. The family of Manuel Diaz, however, claim that that’s just not good enough. They filed a civil lawsuit on Tuesday against the city of Anaheim and its police department, seeking $50 million in damages and demanding to know why the police used lethal force against a fleeing suspect.

The police, as you might expect, are sticking to their guns. The officers involved in the shooting were placed on paid leave, and the police union issued a statement defending the event. The statement argued that the men who were killed were gang members with criminal records. Kerry Condon, the police association’s president, added, “I believe that the independent investigations by the Orange County district attorney’s office into both incidents will show no wrongdoing by these officers.”

Well, that has yet to be determined. The investigation will hopefully provide the public with the truth of what really happened. While it’s impossible to say what occurred when so few details are available, one thing is for certain: it never looks good when police shoot an unarmed man who had his back turned.