Gizmodo, the technology weblog, ran a story last week entitled, “The Secret Online Weapons Store That’ll Sell Anyone Anything,” which exposed a clandestine website called The Armory that allows anonymous dealers to sell guns, ammo and explosives to anyone, regardless of their criminal history or nefarious intentions.

In truth, the entire article about the underground marketplace for weapons can be summed up in the following sentences:

“But there’s every reason to believe that, with a little patience, a lot of money, and uneasy trust, these things [weapons] could have been in my hands—or the hands of anyone else.”

Unfortunately, this is true when it comes to almost anything: drugs, deadly chemicals, sex slaves, child pornography, etc.  Where there is a demand for something, people will find a way to supply it.  That’s the way it’s always been and probably will be.  A point, the author of the article, concedes.

“The Armory shouldn’t scare you, really. There are plenty of ways for a crook to buy guns, and there have been since both crooks and guns existed. The site doesn’t represent some new influx of bullets into murderous hands, so much as it’s a harbinger of things to come—and a klaxon for what’s already here.”

What a concise argument to oppose gun control.  In other words, his comments raise the question, why put restrictions on law-abiding citizens when there are plenty of illicit ways for bad people to obtain weapons? 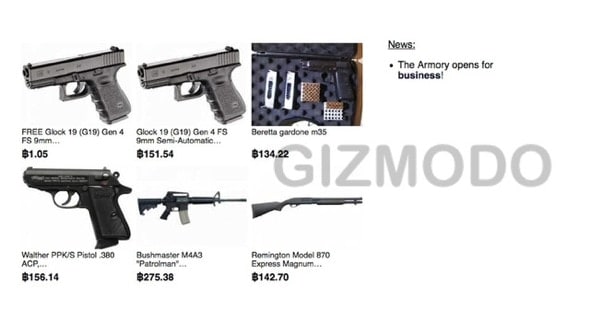 Those harsh realities about black markets and that very logical question about the efficacy of gun control are something to bear in mind when reading the article, which also – because it is Gizmodo, after all – reveals the complex technology that allows a website like The Armory to exist.

To get to The Armory, you need to deploy a free piece of software called TOR. Originally (and ironically) developed by the Navy, it’s become the anonymizing software par excellence among criminals, hackers, schemers, and the otherwise paranoid. TOR routes and reroutes your connection to the Internet through a sprawling maze of encrypted nodes around the world, making it a herculean feat to find out who’s who. The Armory’s URL—ayjkg6ombrsahbx2.onion—reflects that, a garbled string of letters and numbers deliberately impossible to memorize. Once you’re actually signed in, you then have to turn to Bitcoins as mandatory currency, a further exercise in computer secrecy and complexity in itself.

What are Bitcoins worth?  Well, as the author explains, the Bitcoin/Dollar exchange is roughly 9 to 1, meaning one can purchase a 9mm Beretta 92FS with “No scratches or dents, very slight wear from extremely light usage” for 338.69 bitcoins or a little over $3,000.  For a law-abiding citizen, the same gun will cost one $650 to $800.  See, crime doesn’t pay!

Logistically, purchasing weapons via The Armory is a bit more complicated then buying a gun from a guy on the street.  After all, dealers have to ship the weapons to a buyer’s location.  So, how do they do it?

In pieces. Small pieces. The crafty gun dealers of The Armory aren’t going to just stick an assault rifle into a manilla envelope and drop it into a local mailbox. Rather, buyers get each gun component shipped in shielded packages—disguised to look like other products—that then require self-assembly. You get your gun, the dealer gets his money, The Armory retains its secrecy, and the mail carrier doesn’t realize it’s part of an international weapons smuggling operation.

To say that The Armory is one step ahead of law enforcement and governmental authorities would be an understatement.  In fact, the Bureau of Alcohol, Tobacco, Firearms and Explosives appeared to have no idea that it exists.  After calling the ATF for an official comment, both an ATF spokesperson and agent were completely lost when Gizmodo tried to explain The Armory to them.

However, the ATF agent did follow up with Gizmodo after the initial phone call.  The agent confidently explained that The Armory is in Virginia Beach and is a fully licensed and legitimate operation.  The author’s response was classic:

This, despite the fact that I’d explained again and again that it existed only within a marsh of online encryption, with the explicit mission of illegally selling illegal guns, illegally. I explained how a storefront in Virginia was sort of the opposite of The Armory, but it wasn’t much good—the ATF said it’d have to dig around itself again and get back to me. It hasn’t.

Does the ATF’s reaction to the Gizmodo report surprise you?

In any event, make sure you check out the full article here.