Actor Jason Alexander and rapper Ice-T are offering polar opposite opinions about gun control in the wake of the Aurora theater shooting. What’s so interesting about this disagreement is that both celebrities were born in the same place: Newark, New Jersey. Based on their recent comments, Newark might be the only thing that these two men have in common. 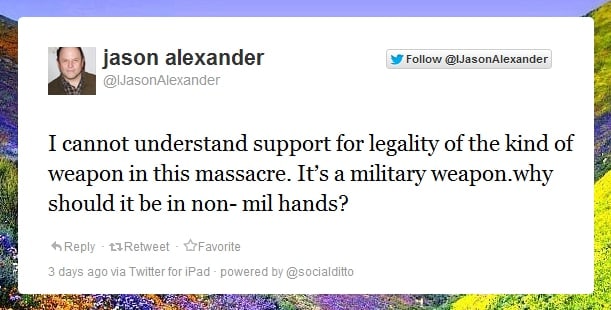 We’ll resist the urge to answer that loaded question because an army of Twitter users answered it for us. Alexander shared in another post, “I get messages from seemingly decent and intelligent people who offer things like: @BrooklynAvi: Guns should only be banned if violent crimes committed with tomatoes means we should ban tomatoes. OR @nysportsguys1: Drunk drivers kill, should we ban fast cars?”

Alexander countered these questions by arguing that the only real purpose of firearms like the AR-15 is to kill other people: “So basically, the purpose of an assault style weapon is to kill more stuff, more fully, faster and from further away. To achieve maximum lethality. Hardly the primary purpose of tomatoes and sports cars.”

Ice-T, on the other hand, participated in an interview with Channel 4 News, revealing that he is pro-gun.

Are you getting a feeling of déjà vu? That’s because Ice-T has said all of this before. He shared in an interview with CNN last month that he sees guns as a means of self-defense against a tyrannical government.

Ice-T hasn’t lost his love of gun rights over the past month. If anything, he’s arguing for gun rights more vehemently. Pairing the statement with an expression that seemed to say, “And if you don’t like it, then too bad,” Ice-T told interviewer Krishnan Guru-Murthy, “I’ll give up my gun when everybody else does.”

Guru-Murthy threw Ice-T a few curve balls, but Ice-T was unflappable in his answers. When the interviewer asked Ice-T if owning a gun made killing people easier, Ice-T answered, “Not really… You can strap explosives on your body. They do that all the time.”

So, which celebrity are you more inclined to agree with? Are assault rifles like AR-15s too dangerous for civilians, or are guns a way for citizens to protect themselves against an oppressive government? We’d love to put Alexander and Ice-T in the same room and listen to them duke it out over gun rights, Newark-style.