Sentinel Designs, LLC, has designed a slim, low-profile magwell for several models of Glock pistols. This Type III hard-anodized all-aluminum magazine well is different from the many other existing options because it was made for all types of shooters with an eye towards concealed-carry.

The Sentinel Glock Magwell is contoured so that it aids in rapid reloads but doesn’t block access to the baseplate at the front making it possible to physically remove a magazine if it’s stuck and doesn’t drop freely. The outer walls of the magwell match the dimensions of the bottom of the grip and don’t flare away from the gun.

Unlike most other after magazine wells, the Sentinel Glock Magwell isn’t designed to add girth or weigh to the gun; while those are good traits for competition, this part is intended for all types everyday-carry. It also doesn’t require modification of the gun, which for agency- or department-issued guns is a very good thing.

The Sentinel Glock Magwell does extend the length of the grip a small amount, and magazines with factory (and most aftermarket) +2 baseplates installed are almost flush with the end of the magazine well.

The first model of Sentinel Glock Magwell will be for the most common Glock pistols, second- and third-generation models 17, 17L, 22, 24, 31, 34 and 35. Current plans are to then manufacture magwells for Glock 19s, 23s and then large-frame Glock pistols. 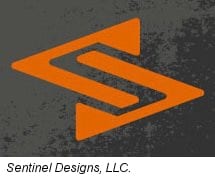 It will be available at the end of August/early September from the Austere Provisions Company for “Less than $65”, according to Clint Lynch of Sentinel Designs. Lynch, owner of the company, previously worked with FN and Knight’s Armament and was one of the designers of the FN SCAR.

We like this magwell and think it will be a hit with many people, particularly anyone who can’t modify their gun with a Sevigny Speedway or similar permanent modification who wants something better than the standard opening. It doesn’t hurt that this accessory is easy on the eyes, either.