Earlier this year we found a nifty project by a couple of Sandia National Labs researchers to develop bullets that can be laser-guided, and early tests show phenomenal accuracy at very long ranges out to about a mile.

The four-inch-long projectiles fire from a smoothbore gun inside a sabot. The bullets don’t need to spin as they have fins down the length of the projectile like a dart and has internal actuators that correct the bullet’s trajectory 30 times a second. At the nose of the bullet is a sensor that tracks a laser projected onto its target, and the bullets electronics adjust the projectile’s flight path mid-air.

Now there’s some competition for Sandia’s project, from the clever boys and girls at DARPA. They’ve begun developing their own type of guided bullet, and they’re calling the project EXACTO—Extreme Accuracy Tasked Ordnance.

The principles used for EXACTO are very different than Sandia’s laser-guided bullet, and it overcomes some of its possible shortcomings.

Primarily, EXACTO uses a remote-guidance system, one that is tied to optics used by the sniping team. This negates having to paint the target, something that could be obscured or detected; a laser can be diffused or blocked by even just smoke, and nobody wants to have snipers advertising where they’re firing from. 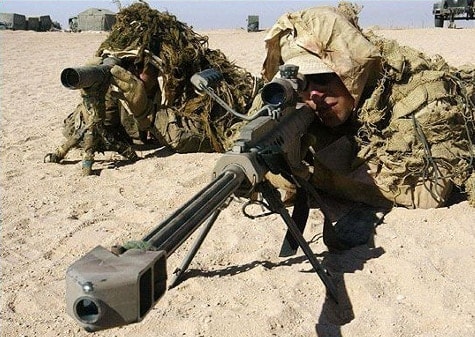 The advantages of using a guided bullet system are clear and powerfully-attractive. This technology increases the range of snipers enormously, dramatically improving their effective range and giving them more places to shoot from. And being able to correct trajectories mid-flight means being able to track and hit moving targets will become a lot easier.

DARPA hopes to expand the technology if and once it gets proven to other types of projectiles. They see EXACTO working with aircraft and vehicle-mounted guns, even naval guns.

Sandia Labs’ laser-guided bullet is still in the development stage, as is EXACTO. Sandia is working on getting their bullet to go faster and farther, while EXACTO has just begun phase II of its development. “Defense contractor Teledyne Scientific & Imaging, LLC was awarded $25 million to build and test a complete system including the required optical sight, the guided .50 caliber projectile, and the aero-actuation controls, power sources, optical guidance systems, and sensors.”

While DARPA almost certainly is focused on the technology for military application exclusively, Sandia is not, and hopes to produce a version of their laser-guided bullet for commercial sale.

Some people might think using a laser-guided bullet is cheating. We’ll see you at the 2000-yard range.