On Wednesday night, before the National Urban League, President Obama vowed to “leave no stone unturned” in finding ways to reduce violence in America, including “common sense” gun control.

“A lot of gun owners would agree that AK-47s belong in the hands of soldiers, not in the hands of criminals — that they belong on the battlefield of war, not on the streets of our cities,” the president said in his speech, which comes in the wake of the Aurora movie theater massacre. 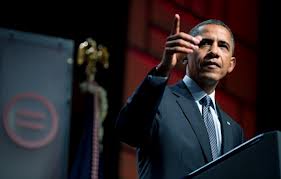 “I believe the majority of gun owners would agree that we should do everything possible to prevent criminals and fugitives from purchasing weapons; that we should check someone’s criminal record before they can check out a gun seller; that a mentally unbalanced individual should not be able to get his hands on a gun so easily,” he said. “These steps shouldn’t be controversial. They should be common sense.”

These are the most explicit comments the President has made on the topic of guns and gun control since the Tucson shootings in 2011, in which Rep. Gabrielle Giffords (D-AZ) was critically wounded.

Obama said that while his administration has taken steps to curb violence following Tucson – background checks are “more thorough and more complete” and federal agencies are working “in the trenches” with civic groups and community leaders to find solutions – further progress has been thwarted by political opposition and a collective disinterest to tougher gun laws.

“When there is an extraordinarily heartbreaking tragedy like the one we saw, there’s always an outcry immediately after for action. And there’s talk of new reforms, and there’s talk of new legislation,” Obama exclaimed.  “And too often, those efforts are defeated by politics and by lobbying and eventually by the pull of our collective attention elsewhere.”

Although the President has supported reinstituting the Assault Weapons Ban (AWB) in the past, he did not offer any specifics on how he plans to impose tougher gun laws.  In fact, leading up to the speech, White House officials remained adamant about enforcing “existing laws.”

Case in point, on Sunday when the president was headed to Aurora to meet with victims, press Secretary Jay Carney was probed about whether there would be no renewed push for the AWB, he consented, saying “I wouldn’t argue with your assessment about that.”

With the 2012 election looming, it will be interesting to see how Obama responds to questions on gun control.  Will he continue to play it coy, spouting campaign platitudes?  Or will he discuss, in detail, his administrations plans for the future.