Extreme Tech reports that an American Gunsmith has become the first person to build and shoot a gun that is partially constructed out of plastic, 3D printed parts. Forum user HaveBlue of the AR-15 forum used a 3D printer to create this custom .22-caliber pistol, combining a plastic AR-15 lower receiver and metallic, commercial upper.

For those of you who have never even heard of a 3D-printer, they’re basically machines that convert chunks of plastic into custom shapes. Once you’ve entered the dimensions into the computer, you can pump out perfect replicas at the touch of a button, exactly the same way that you’d print out multiple copies of a document.

The only difference here is that instead of printing out a letter, this machine prints out gun parts. HaveBlue estimated that it cost him about $30 to print his lower, but some other modern printers could “bring the cost down to perhaps $10.”

But it’s made out of cheap plastic, so surely the thing doesn’t work as well as a normal gun, right? Actually, this plastic lower seems to work fine. HaveBlue claimed that he fired 200 rounds out of the plastic pistol, and so far it’s working just dandy. You can find the schematics here. 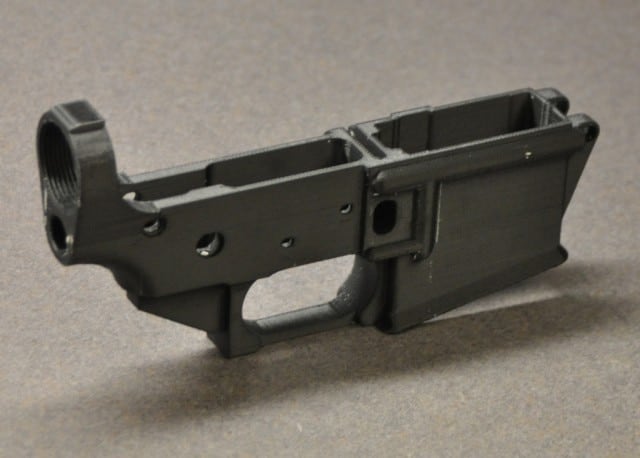 These plastic lowers will appeal to some gun owners because they’re cheaper and lighter than their metallic counterparts, but the only catch is that they open up a loophole for felons. Extreme Tech pointed out that the lower receiver is the part of the gun that’s legally-controlled. Felons who normally wouldn’t be able to get their hands on a gun could buy $10 worth of plastic, print off a lower, and then legally obtain the remaining gun parts to assemble a firearm.

That’s always the tricky thing about technology, isn’t it? The laws are set up just fine until somebody invents something new, and suddenly legislators are scrambling to catch up. How long will it be before we start seeing new laws against plastic lowers?

Similarly, are we destined to see heated forum debates about the merits of part-plastic guns versus all-metal guns? We can practically hear the arguments already:

The Nostalgic Gun Owner: “It’s not even a real gun! Keep your cheap, plastic Made in China toy parts away from my authentic firearms!”

The Practical Gun Owner: “But who cares if it’s plastic or metal as long as it’s effective? My gun weighs a pound less than it used to, which means less waver and better aim. I’ll out-shoot your metal gun any day of the week!”