Armory Blog reports that Greek Triple Jumper Voila Papachristou is in hot water with the Greek Olympic Committee due in part to gun pictures that she posted on her Twitter website.

“In part” being the key phrase in that sentence. The main thing that got her in trouble was her attempt at racist humor. She simultaneously made a jab at Africans and immigrants when she tweeted, “With so many Africans in Greece, the West Nile mosquitoes will be getting home food!!!”

The Greek Olympic Committee wasn’t particularly thrilled about that, so they booted her from the Olympic Games this year. Isidoros Kouvelos, the head of the Greek mission, said “We are not here just to get medals, but to promote the Olympic ideals, to show our character.” 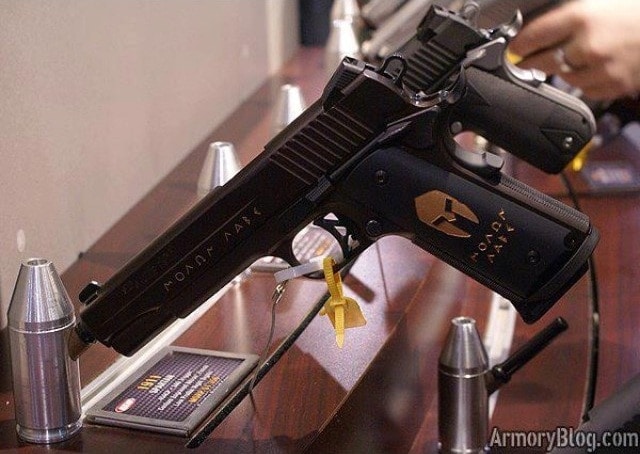 That being said, she’s gotten into even more trouble for making posts about guns. She posted a picture of the Sig Sauer Spartan ΜΟΛΩΝ ΛΑΒΕ 1911, complete with a Spartan helmet on the grips and slide. King Leonidas (that angry half-naked guy from “300“) supposedly shouted “ΜΟΛΩΝ ΛΑΒΕ” (“come and take them”) at the Persian army when they commanded to Greeks put down their spears.

It’s not surprising that this gun picture would appeal to Greek citizens. You could hate guns and still get a kick out of this picture, because it brings an piece of national history into the modern day.

The Greek Olympic Committee, however, was not amused. Papacrhistou has gotten into more trouble with Committee because the picture was not in the “spirit of Olympic competition.” But wait — are the shooting competitions also against the spirit of the Olympics? We’re confused. How is that not hypocritical?