In the wake of the Colorado shooting that left 12 people dead and 58 wounded, Mexican President Felipe Calderón had some strong advice for the United States.

On his Twitter account on Saturday, Calderón first offered his condolences to the United States after 24-year-old James Holmes entered an Aurora movie theater armed with an AR-15, a Remington shotgun, and a .40-caliber Glock and opened fire on the audience.

But soon after publishing that Tweet, Calderón brought his politics to the fore, calling for the U.S. to rethink it’s policy on guns.

“Because of the Aurora, Colorado tragedy, the American Congress must review its mistaken legislation on guns. It’s doing damage to us all,” Calderón said.

This is certainly not the first time Calderón has told the U.S. it needs to implement gun control measures.  In a 2010 speech before the U.S. Congress, he asked lawmakers to renew the Assault Weapons Ban, which expired in 2004.  Since then, whenever he’s had the chance, he’s been doubling down on that request.

Earlier this year, when Calderón erected a sign on the Mexican side of the Bridge of Americas that reads, in English: “No More Weapons,” he blamed America’s “failed gun policies” for the violence in Mexico, adding that America needs to do its part to curb the violence. 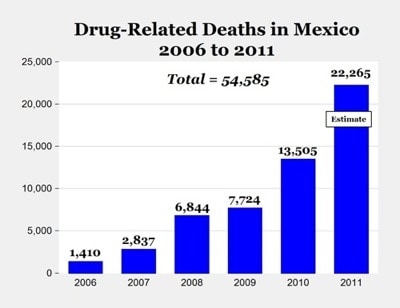 “The criminals have become more and more vicious in their eagerness to spark fear and anxiety in society,” Calderón said as Mexican Army tanks crushed thousands of confiscated firearms at the event back in February. “One of the main factors that allows criminals to strengthen themselves is the unlimited access to high-powered weapons, which are sold freely, and also indiscriminately, in the United States of America.”

“We need your help to stop this violence. We need you to reduce your consumption of drugs and to dramatically reduce the flow of money to criminal organizations in Mexico,” Calderón continued.

“But beyond the topic of drugs, the best way that you, the American people, can help reduce the violence in Mexico is through legislation that has already been in force in the United States, blocking the inhumane weapons trafficking into our country,” he said.

As Guns.com has pointed out in the past, Calderón’s pro-gun control pleas stem from the fact that Mexico’s drug violence is out of control.  Since he launched his war on drugs in 2006-2007, almost 55,000 people have been killed.

Clearly, his administration’s efforts to crack down on gangs and drug-related violence have backfired, which may be a key reason why he is so inclined to point the finger at America’s gun laws, which have little, if anything, to do with the surge of violence in Mexico.